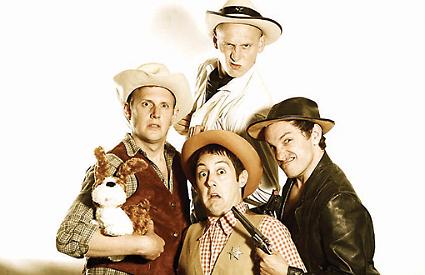 THERE is always a fair bit of clowning around with friends at university, but for those friends to stick together and make a career out of it is rather more unusual, writes Alison Stodolnic.

Le Navet Bete, now an internationally touring troupe of clowns, did just that. They first met whilst studying theatre and performance at the University of Exeter, and formed Le Navet Bete straight after graduating in 2006.

“Three of us worked together in our final year at university, where you have to make a piece of theatre,” explains performer Al Dunn. “We got the highest mark in the history of the course and our lecturers said to us: ‘You’ve got to do something with this’. ”

Inspired by their success, the group of friends stayed in Exeter and formed a theatre company. They set their sights on performing at the Edinburgh Festival first of all, which led to more bookings, and since then they have built up their repertoire and fan-base to such an extent that they can now perform on a full-time basis.

Their high-energy shows are a unique mix of clowning, acrobatics, slapstick and mime — and often involve a little audience participation at some point during the performance.