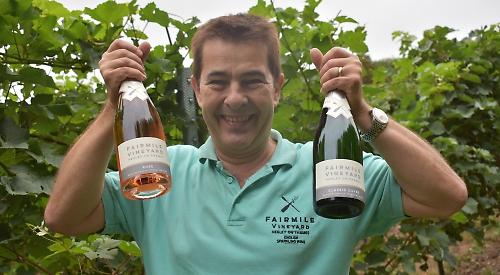 HENLEY’S very own brand of English sparkling wine has arrived.

He has produced a classic cuvée and a rosé from the 12,000 vines, which produce Pinot Meunier, Pinot Noir and Chardonnay varieties and are a mix used for traditional French Champagne.

The first batch of 6,000  bottles are now available to buy and come from the vineyard’s first harvest in October 2015.

Mr Mirkowski says his wine should be able to hold its own against more established names.

He is meeting with retailers, restaurants and hotels to try and get them to stock his product. The first retailer to sign up was Watlington Fine Wines, at Watcombe Manor Farm in Ingham Lane.

Mr Mirkowski said: “We are absolutely thrilled with how the wine tastes. Nobody has had a bad word to say about it.

“I have a feeling a lot of people will think it’s as good, if not better, than the imported wine which costs the same amount.”

The three varieties of grape were pressed separately by winemakers Antoine Arnault and Felix Gabillet, based at Hambledon Winery, in Hampshire.

The highest quality juice is then fermented in temperature controlled conditions, to preserve the delicate fragrances.  It is then matured in oak barrels to add vanilla, cream and caramel overtones.

The rosé is given its different colour and taste by not being put into a barrel and containing more tannins, which include the plants, seeds, bark, wood, leaves and fruit skins from the grapes.

In April 2016 the still wines were blended together by Hervé Jestin, head winemaker at the winery, to finish the wines and give them their final colour.

The wine is then poured into glass bottles, where yeast and sugar are added to create the bubbles.

Earlier this year the dead yeast was removed from the bottles, by putting the bottles upside down and freezing the liquid. Once the yeast is removed the mushroom shaped corks are secured with a wire cage.

Mr Mirkowski took delivery of the first bottles about a week ago, which include the vineyard’s logo of a rowing oar and a “popping” bottle. The cuvée sells for £30 a bottle and the rosé is £35.

Mr Mirkowski moved to Henley from Marlow, where he worked in telecommunications, with his wife Anthea and daughters Eloise, 11, and Verity, seven.

When his daughters were born he decided he wanted to be able to spend more time at home so decided to look for somewhere to start his vineyard.

He added: “I hope people will buy it not just because its local but because they think it’s great. The product has to stand on its own two feet.”

There will be an open day at the vineyard from 10am to noon and 2pm to 5pm from tomorrow (Saturday) to Monday. Entry is free.