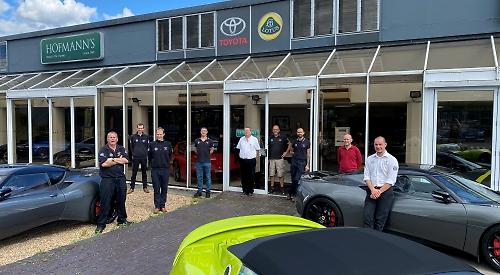 BUSINESS owners in Henley feel the job retention bonus will offer them a lifeline as they look to recover from the impact of the coronavirus pandemic.

The furlough scheme, which will support companies until the end of October, will be replaced with a one-off payment of £1,000 for each worker that stays on until January.

The bonus applies to employees who earn more than £520 per month and payments will be made from February.

It is estimated that it will cost up to £9.4bn to deliver. To date the furlough scheme has supported around nine million employees across the country.

David Rodger-Sharp’s jewellery shop in Duke Street has increased his staff from five to seven since the lockdown started.

The five original workers were eligible for furlough and all but one member of staff has returned since the shop re-opened last month.

He praised the retention bonus, saying: “It gives me an incentive to keep on all of my staff and we are very lucky in Henley in that we have been super busy since reopening.

“It will be a little bit of extra money after Christmas and it will certainly help to pay the bills.

“Only one person hasn’t come back because of health reasons and he is still being furloughed.

“We have expanded and kept ourselves busy and I haven’t furloughed myself. The original furlough scheme gave us peace of mind while we were closed.”

During this time, Mr Rodger-Sharp topped up the wages of his staff by paying the 20 per cent that wasn’t provided by the Government.

He received a business grant worth £25,000 from South Oxfordshire District Council.

He added: “My staff are all local and they have mortgages and bills to pay themselves. They have families to feed and we wanted to do the right thing by them.

“We didn’t want to take unnecessary help. Without the furlough scheme, most businesses would have had to make people redundant, but you want look after your people as well.”

Chris Randall, managing director of Hofmann’s of Henley, praised the scheme’s flexibility and said he was pleased to be back doing business. Mr Randall said: “The job retention scheme has been a godsend. We didn’t ever close completely, but we did trim down a considerable number of staff.

The scheme allowed us to reduce our overheads. We have got one person who is still fully on the scheme and a second who is now back with us part-time while they manage childcare.

“Having the option to furlough people part-time has really helped. It is the difference between survival for us, because we would have been laying a lot of people off if it wasn’t for that scheme.

“I imagine by October we will have nobody on the scheme. I have been very anxious to get the business back up to full steam. I don’t want to be contributing towards to the Government’s debt pile.”

Lise Harrow, co-owner of Stocks clothing store in Bell Street, says the business would have tried not to lose any staff.

She said: “The furlough scheme is something we are very grateful to have been given the opportunity to take advantage of.

“It has meant we have been able to keep our staff during the period of closure. When I heard about the retention bonus, I thought it was nice, but we would look to keep everyone regardless.”

France Baudet, owner of Cannelle Medispa in Hart Street, said her business would not have survived if it was not for the furlough scheme.

The beauty salon re-opened on Monday after nearly four months. There is another branch in Oxford and Mrs Baudet was able to furlough a total of 13 members of staff.

She said: “The system has been quick and easy and I think my staff were happy as well because they were at home and still receiving 80 per cent of their salary.

“They are now able to have part-time furlough and part-time working, which is brilliant. Without furlough, my business would not have survived.”

She added: “I didn’t furlough myself during the lockdown, so I have done a lot of work during that time, such as marketing and cleaning but when I found out that I could re-open I couldn’t sleep because of the excitement.”