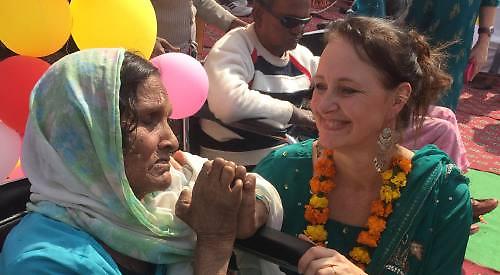 THE owners of a podiatry clinic in Wargrave say they have been very busy since re-opening when the coronavirus restrictions were eased.

Mandy Morris and Alison Clark-Morris closed Feetwise Footcare in March when the lockdown came into force.

This was less than six months after they had opened the business in a rented room above the Wargrave Dental Clinic in High Street, where Mrs Morris also works two days a week as a nurse and receptionist.

Mrs Clark-Morris has more than 30 years’ experience in podiatry.

The women began trading again on July 1 after putting a series of safey measures in place to help prevent the spread of covid-19.

Appointment times are now hourly instead of the normal half hour so there is time to clean between each customer.

Clients have their temperature taken on arrival and they are asked to sanitise their hands as well as wear a mask and gloves.

Mrs Morris said the system was working well under difficult circumstances, although it meant they could see only about seven customers each day.

She said: “Things are going really well. We are booking the appointments so that people aren’t crossing over with each other when they arrive and we are ready for them.

“We don’t want them to be in the waiting room and we ask everyone to arrive promptly.

“The cleaning side of things is what we would normally do anyway but the extra time allows people to pay and leave before the next person is due. It means people are less at risk.

“We always wear aprons, masks and gloves and we have now upped that to wearing a visor as well.

“Our cleaning protocols are the same but we now make sure we have more ventilation in the room.”

During the three months that Feetwise was closed, Mrs Morris spent time marketing the business and putting all client information into a digital system.

The women received a micro business grant to make up for its loss of income during the lockdown after being contacted by Wokingham Borough Council.

Mrs Morris, who lives in Wallingford, said: “We were very grateful to the council. They were very proactive in reaching out to businesses and the grant gives us an extra bit of money.”

In addition, the dental clinic, which is run by husband and wife Ranju Khurana and Anu Chadha, waived the rent during that period.

Mrs Morris said: “It has been very hard but Ranju has been extremely kind to us with our rent, which has made things more manageable.

“Because we are a new business they wanted to help us get started. We haven’t had big expenses to cover. We used savings to do all of that, so everything has just been put on hold really.

“Thankfully, since we opened we have been very busy and had lots of people asking for appointment times.

“We have encouraged people who have been shielding to continue to put off their treatment until they absolutely need it. There are people who are most vulnerable.”

A few weeks before the lockdown, the women went to India to treat patients at the Village of Hope, a leprosy colony in East Delhi. They were accompanied by Mrs Morris’s partner, Michael Palfrey.

Leprosy is a chronic infectious disease caused by the spread of bacteria. If it goes untreated, people may have to have limbs amputated.

The women treated 57 people during their visit.

Between October and December last year, they had raised almsot £4,000 to buy 57 tricycles for the locals to use as these help to relieve the pressure on their injuries. The money also went towards blankets.

The village was founded in 1993 by the Hope Foundation and has a community of about 4,000 people. Every family has at least one person with leprosy and treatment is provided free of charge.