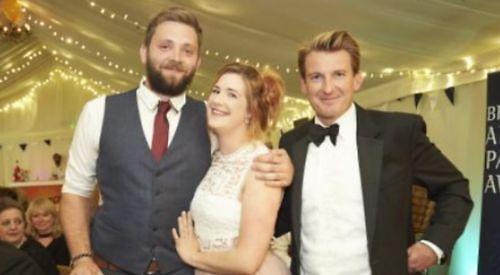 Owen Hardy and his fiancée Jade Jeffries have taken over the Brakspear pub from Richard Chapman, who has left after 18 months.

They have agreed a five-year tenancy and will be living at the pub with their three-year-old Yorkshire terrier, Teddy.

The couple have nearly 20 years’ experience in hospitality between them and met while they were both working at a hotel on the Isle of Arran in Scotland.

Mr Hardy, 27, who is originally from Doncaster, and Ms Jeffries ran the White Bear in Warlingham for two years from 2017 and then moved to the Green Man in Hurst.

While they were at the White Bear, they won the best kept cellar award from Brakspear.

Mr Hardy said: “We looked at a few places but the Horns was the only one we saw where we thought we could make it work and it certainly had the most potential.

“We really liked the community vibe and we definitely want it to be a community pub.

“I have always been interested in this industry. I started doing hotel shifts when I was 13 just to get pocket money and I became fascinated by it.

“I was working at the hotel in Scotland as the assistant manager and that’s where I met Jade four years ago when she was waitressing.

“We are both very passionate and work together really well.

“I’m quite good at keeping ale and I want the Horns be known as an ale pub. The food will also be important to us and our chef is currently working on the menu.

“We are confident that we can make it work — we wouldn’t be going into it if we didn’t believe that. It just takes time and effort and we are more than willing to do that. The reception so far has been really positive.”

Mr Hardy is keen to have live music at the pub when coronavirus guidelines allow indoor performances to return and he has plans to start a village shop selling essential supplies to the community, which he feels could be even more important if the covid-19 restrictions are tightened

“It was somewhere that we could picture ourselves,” she said. “It has the style and ambience that we feel we want from our pub and the bar area took our breath away.

“To find such beauty in a lovely old pub is rare.

“We are very excited to join the village and we hope that with hearty homemade food and our passion for community spirit, we can become a big part of that.

“We love the buzz of a busy pub and we hope that our excitement will spread to the community at a much-needed time.”

“They’ve managed other Brakspear pubs, so we’ve known them for a while and it’s great to be able to offer them their own pub.

“It’s a big challenge for them but we know they’ll do a fantastic job and are sure the village will get behind them.”

The couple had planned to get married at Henley Town Hall in February but have put the ceremony on hold until 2022 in the hope the coronavirus has gone by then and more people can attend.

Mr Chapman decided to move back to his native Yorkshire as his two children, Ellie and Sam, were getting older.

• There will be a welcoming party at the pub with drinks and canapes today, starting at 6pm.