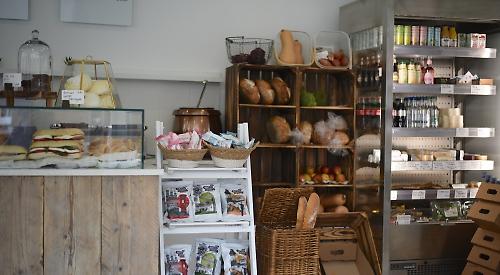 THE owner of a new coffee shop in Wargrave says she hopes to attract more trade to the village.

This is opposite the site of another coffee shop, H’artisan, which is due to open later this year.

“When you open something on the high street, it encourages other businesses to do the same.

“I’m hoping people will have seen the footfall coming to our café and realised there are people who want to come out and buy in Wargrave.

“This should just be about businesses working together — nothing should be competitive.

“We all want to just have more footfall and serve the community, so I’m hoping this will drive other things.

“I think there is a lot of love for local, independent businesses. They work so hard to keep themselves open and people have a new-found love for something that is just down the road. It is nice to be able to walk somewhere, especially now.” Mrs Nagi, who has spent the last 18 years working in financial services, said she had wanted to find a village without a café like hers and Wargrave didn’t have many businesses in the high street.

“I’m a bit of a coffee snob and I’m really fussy,” she said. “That was one of the reasons I went into it.”

Daisy Love offers tea and coffee cakes, pastries and sandwiches. It uses local suppliers whenever possible — the cheese comes from the Nettlebed Creamery. It also has a boutique that sells a range of handmade goods, such as candles, chutneys, gifts and soaps.

Mrs Nagi, who lives in Maidenhead with her sons, Arun, 13, and Dhiren, 10, first thought of opening the café before the lockdown in March but had to wait until August to get access to the unit.

She then spent another four weeks improving the interior. She said: “Over the last five years, I’ve been doing a lot of work with small businesses and start-ups.

“While I was working in financial services, I started doing community-based projects for the Royal Borough of Windsor and Maidenhead, like street food events and Christmas markets.

“I’ve always wanted to help independent businesses and three years ago I was approached to create a coffee shop that would act as a community hub in Maidenhead.

“It was incredibly successful and is still going. I then took redundancy and another landlord approached me about opening a coffee shop in Holyport in January.”

Mrs Nagi said Daisy Love was still developing. “I don’t think we are 100 per cent ready,” she said. “The business will grow and eventually, post-covid, I would love to host some workshops and courses to make it more than just a café.

“If someone wants to have an art night, we could hold it in there. There are enough people in the village for things like that to work.”

The café, which has a manager and two baristas, has five tables inside, which are distanced 2m apart, and only three people are allowed in the queue at any one time.  It is open from 7.30am to 5pm on weekdays, 8am to 4.30pm on Saturday and 9am to 4pm on Sunday.

The opening of Daisy Love is welcome news for Wargrave following the closure of other businesses.

Last year, the Italian restaurant Da Toni closed after less than 12 months, having replaced the Haweli restaurant, which shut in June 2018.  Talbot and Associates, an accountancy firm in High Street, left a year ago and this is where H’artisan will move into.

Victoria News, a newsagent and post office in Victoria Road, closed in August 2019 following repeated attempts by the owners to sell the business.  Wargrave Antiques in High Street, which closed in 2016, is in the process of being converted into a residential unit.