Former pub to be converted into cafe for young families 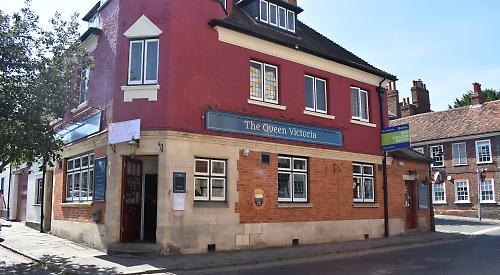 A FORMER Henley pub is to be converted into a café for young families.

Esther Payne has taken over the old Queen Victoria building behind the town hall and turned it into the the Watercolour Arts & Play Café.

The café, which is aimed at parents with young children, was due to be launched last month but this has been postponed because of the second coronavirus lockdown.

It will now open on Monday, offering takeaway coffee, soup and pizza.

The 43-year-old former accountant, who is married to Henley Hawks player Matt Payne, used to live in Brazil and came to England 17 years ago.

She came up with the idea of a family friendly café as she thinks none of the other coffee shops in Henley provides enough space or activities for children. Mrs Payne, who has three-year-old twin sons, Oliver and Thomas, said: “I started to go out for coffee in Henley and I couldn’t find a place that would be good for kids.

“I used to work with kids at a nursery in Brazil and I thought I could bring something similar to Henley. It is a coffee place with soft play upstairs and downstairs will have a room for art classes and birthday parties.

“We still need to finish downstairs because we had to do everything from scratch with it being a pub before this. We started working a year ago and we had to knock down lots of walls — it was a big job.

“We see this venture as becoming the heart of Henley, where children, parents, carers and friends can meet and have fun together.”

Mrs Payne, who lives near Peppard, where her husband runs Manor Mix Concrete, said that her daughter, Laura Roberge, would manage the café.

She said: “I hope it will be there for a long time and that there will be more than one. My idea is to branch out and open more around the UK.

“The idea behind the café is a lot more exciting than just another coffee shop in town. We want to create a space where adults and children can come to spend time together, relaxing and having fun while also enjoying delicious food.

“I think this is something that Henley will benefit from. There are lots of mums and kids around and people like to go to coffee shops, so I think it is much-needed.

“There will be lots of toys for the children and they will be well entertained. We will also have wooden educational toys for them. My original idea was to have a bigger space for soft play but I decided a smaller one would be better to start with.

“Because of coronavirus, I don’t know how many children we will be able to have at one time. We are going to work with a table booking system to start with.”

The café will be open from 9am to 5pm Tuesday to Saturday and 10am to 4pm on Sundays.

The Queen Victoria closed at the beginning of last year. Plans to turn part of the Grade II listed building into a mixture of homes and flats were approved by South Oxfordshire District Council in September last year but the development work never began.

This was when it was owned by EI Publican Partnerships. The building is now owned by Mr Payne’s father Graham.