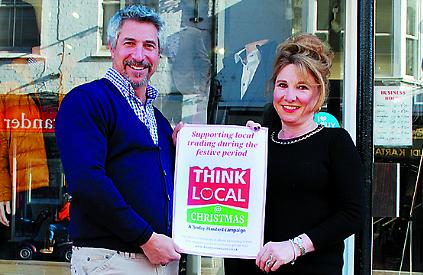 INDEPENDENT traders in Henley are hoping for a cracking Christmas.

They will be taking part in the new late-night shopping event called Switch On and Shop on Friday, November 21, when shops will stay open until 9pm, as well as the traditional Christmas festival that will happen two weeks later.

Laurence Morris, who runs Laurence Menswear in Duke Street, said: Henley needs local independents as theyre what make the town and its important that the local community supports us because we really do rely on them.

Late-night shopping is a great initiative and hopefully it will attract lots of people into town.

Clinton Morgan, manager of the Upstairs and Downstairs tea shop in Duke Street, added: Late-night shopping is wonderful and it makes the town a great place to wander around. The warmth, friendliness and Christmas spirit is glowing and its a lovely time.

Independent shops are very important in Henley and should definitely be encouraged.

Annette March, who runs White Gdn florist in Hart Street, said she thought Switch On and Shop was a great idea.

She said: No one seems to miss independent shops until they are gone and then they realise they cant get unique products any more. Lots of my customers appreciate the quality and uniqueness which you dont always get in chains.

Hilary Redhead, manager at the Bell Bookshop in Bell Street, said: The late-night shopping event should be good and we are looking forward to it and the Christmas festival in December. Independent shops should be supported  the more people we can get people to visit and spend money in them the more it will help keep them in the high street. They are important to towns and its more quirky to have different shops.

Michael Carlton, who runs Bagatelle Toys in Bell Street, said he was expecting to be busy during the late night-shopping event.

He said: For us its just staying open for another two hours. People are very supportive of independent shops in Henley and Im very glad we have this initiative.

Kirsty Chapman, manager of the Lemongrove Gallery in Duke Street, said: The nice thing about Henley is that people come here expecting something different and to discover smaller independent shops. Its really important people support them and keep Henley flourishing.

Richard Ellis, who recently opened Memories 4 U in Market Place Mews, which sells picture frames, is looking forward to the shops first Christmas.

He said: This is what we are all about  local goods and crafts which make Christmas feel more personal. If you dont have independent shops the town will die. Lets get back to that community spirit of all being in it together rather than all the profit going out of the town.

Tim Ruddock, who runs gallery and photography store Henley Studios in Duke Street, said: Campaigns like this are brilliant because sometimes Christmas shopping is more about the razzmatazz than the actual shopping.

David Jack, who runs both Noa Noa and Hubbledays in Duke Street, will be offering mulled wine and mince pies to customers during the Switch On and Shop.

He said: Its a good idea in the build up to Christmas because it gets everyone in the mood. Independent businesses have historically been Henleys strength. Its not quite as strong as it used to be so it would be nice to attract a few more people into the town.

Town centre manager Peter McConnell said: Everybody loves the fact that Henley has independent traders and Christmas is a vital time of the year for all the small shops in the town. I am handing out a challenge to people to use these shops to purchase their gifts for family and friends. I am aware that we dont sell everything but if there is an item you can get in Henley, do that rather than go on the internet. It is about keeping Christmas local and I fully endorse the Henley Standards campaign.

Meanwhile, the Christmas Store has opened in the former Revolution store in Market Place. Run by Linda and George Lock, from Southampton, it sells cards, wrapping paper, tinsel and decorations. Revolution closed in May last year.

• There will be free parking every Tuesday afternoon in December at the South Oxfordshire District Council car parks in Greys Road, Kings Road and Southfields, off Goodall Close.