Ethiopians proud to be followers 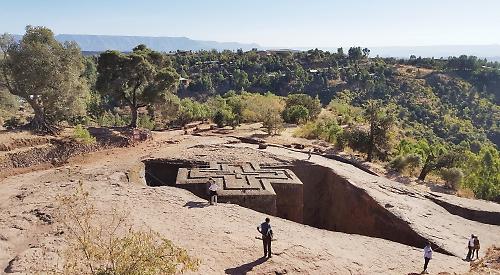 IN January I was privileged to be a member of the Bishop of Reading’s pilgrimage to Ethiopia.

For two weeks, a group of just over 20 Anglican clergy, mostly from the Reading area, visited some of the most important Christian sites in that country. For a number of us, me included, it was eye-opening.

Ethiopia has been a Christian country since the fourth century — that’s as long as the UK — and some of the churches we visited were older than most of the churches in the Henley area.

Ethiopia is about five times the size of the UK with a population of about 100 million, of whom about 55 million belong to the Ethiopian Orthodox Church.

There are about 30 million Muslims, most of whom live in the desert areas of south-east Ethiopia over towards Somalia, and the remainder are “other” Christian, such as Catholic, Anglican or Pentecostal, or follow traditional tribal or animist religions.

The most famous of the Ethiopian churches are the rock-cut churches of Lalibela, carved out over a period of perhaps 100 years, starting around 1150AD.

St George’s (pictured) dates to around 1250 and is carved out of the bedrock. The pit surrounding it is 15m deep and the church is accessed via a trench.

The Ethiopian Orthodox Church has survived so long, surrounded as it is by a sea of Islam, because it has its heartlands in the Ethiopian highlands, which are mountainous and, until the recent arrival of air travel, extremely inaccessible.

Recent road building and the advent of the mobile phone and internet (with infrastructure supplied by China) are now exposing this ancient church with its deep-rooted, rural traditions, to the “modern” world in a way that challenges its very existence.

The increase in tourism, albeit with much-needed foreign currency, also brings a threat to formerly settled ways of faith and life.

But the one thing that Ethiopian Orthodoxy has proved time and again is its resilience: Muslim invasions with desecration and destruction of thousands of churches in both the 16th and 19th centuries have been shrugged off, churches rebuilt (most are made from wood and mud) and treasures returned from their hiding places in hilltop monasteries.

Christians wear a neck cross or have a cross tattooed on their forehead, marking them out as belonging to Him who died for them. In this society, there is no social stigma in being known as a follower of Jesus.