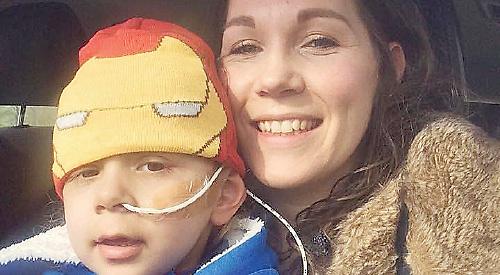 A WOMAN is planning to cycle 750 miles to raise money for lifesaving treatment for a friend’s son.

Yvette Kershaw, 38, of Rokeby Drive, Tokers Green, hopes to raise £10,000 by riding from the John Radcliffe Hospital in Oxford to John O’Groats in Scotland in seven days.

The money will go towards the £250,000 needed to pay for treatment for three-year-old Reuben Virdee, who has neuroblastoma, a rare type of cancer that mostly affects children.

Mrs Kershaw knows Reuben’s parents Jessica and Kulwant, from Maidenhead, as she worked with his mother as teachers in the English department at Piggott School in Wargrave.

She said: “My ride will be a maximum of seven days of punishing physical and mental pain but little Reuben and Jess and Kul are enduring a far, far longer and harder trial and they’re doing it with bravery and compassion and phenomenal strength. I can ride a few hundred miles to help them save their beautiful son.”

Reuben was diagnosed in December and doctors found the cancer had spread from his abdomen to his bone marrow and bones.

He spent his third birthday in hospital and has undergone MRI scans, bone marrow and tumour biopsies, a blood and platelet transfusion and four rounds of chemotherapy.

The Virdees, who also have a five-month-old son called Hari, have so far raised £80,000 towards the cost of the treatment available in America once Reuben is in remission. More than 2,200 people and organisations have made donations. Mrs Kershaw said: “I met Jessica when we worked together at Piggott and we became really good friends over 10 years. We’ve been at the main events in each other’s lives — hen parties, weddings and births of children.

“One of the children getting cancer is not something you expect to have to help each other through.

“When I found out, I felt just shock and disbelief. There was no warning.

“They were told the best option was to raise money for treatment in the US. As soon as I found out about that I knew I had to do something to help.”

Mrs Kershaw’s ride will take place from May 27 to June 2 and she will be joined on the final part of her journey by her husband Dave and their two children Lexi, six, and Ellie Skye, three.

She has been training by riding up to 200 miles a week. “I am fitting it around childcare,” she said. “It is knackering but I just keep thinking this is a short term and I’ll be back to normal soon but for Reuben and his parents there is no end in sight. Their whole lives have been turned upside down.

“I have to do 120 miles a day for seven days then it will be over and I’ll go back to my normal life.”

Her husband and children will fly up to Scotland on June 1 to meet her.