Woman, 85, breaks pelvis in manhole trip... months after it was first reported 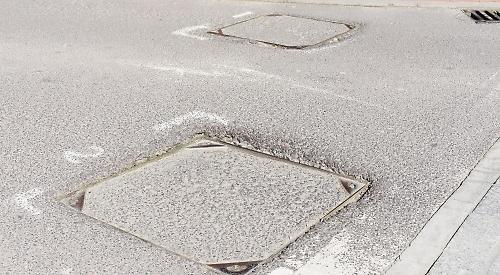 A WOMAN fractured her pelvis when she tripped on a dangerous manhole cover in Henley that was first raised as a hazard nine months ago.

Elaine Williams, 85, has spent most of the three weeks since the accident in bed and has been prescribed morphine because she is in so much pain.

Doctors have warned her that it could take months for her to make a full recovery.

Mrs Williams, of Sedgefield Close, Sonning Common, was shopping with her friend and housemate Margaret Moola at lunchtime on April 19 when she tripped over the sunken manhole on the exit from the Waitrose (King’s Road) car park, off Bell Street.

An ambulance was called but she was helped by passers-by, including a doctor. The same manhole was highlighted as a danger in letters published in the Henley Standard in September and November when Oxfordshire County Council, the highways authority, said that it would investigate.

Mrs Williams, who runs the community singing group Nottakwire with Mrs Moola, said they were crossing the exit road when she fell.

Speaking from her bed, she said: “Margaret was a few steps ahead of me one minute and the next minute I was down.

“I was knocked around quite badly and I remember somebody saying ‘keep still’. When you hurt yourself the pain comes on a few hours later but I have had a lot of pain.”

Mrs Moola said: “There are two sunken manhole covers. Elaine was behind me and I suddenly heard her go down and found her in the road. She said she’d caught her foot in the first manhole cover.

“She was in shock but we had people who stopped immediately to help and were fantastic.

“It took about 20 minutes, I suppose, before Elaine started to be able to communicate properly with people. She was in pain, obviously.

“A Pcso attended and she stuck a Biro in the part where Elaine caught her foot and said, ‘that’s at least two inches’ so it’s very, very dangerous.”

An ambulance was called and Dr Will Hearsey, a GP at the Hart Surgery in Henley, was passing and examined her.

Mrs Moola said: “Staff at Mayther brought a chair out for her and provided her with a sweet drink.

“I went and got water from M&Co and some antiseptic wipes. She had a very nasty large graze on her elbow. It was an horrendous ordeal.”

The ambulance arrived just over an hour after being called. The paramedics wanted to take Mrs Williams to Townlands Memorial Hospital for an X-ray but staff there said this wasn’t possible so she was taken to the Royal Berkshire Hospital in Reading instead.

Mrs Moola brought her home that evening but struggled to help her upstairs.

She said: “It took more than 30 minutes to get up one flight. She was stuck on every step and crying and in agony.

“I’m 75 and I couldn’t support her weight and she was frightened. Eventually I got her upstairs.”

Since the incident Mrs Williams has been visited by a carer twice a week and she is paying for a physiotherapist to visit as the NHS couldn’t provide one soon enough.

Mrs Moola said: “The doctor told us that the critical period for any physio to take place was in the first two to three weeks immediately after the accident.

“The physio has said Elaine can do the stairs every day but it will take her a long time for this to heal.”

Mrs Williams said: “It’s very, very uncomfortable in bed because I’m lying on my back and there’s no way I could lie on either side.

“Margaret has had to lift my legs for me to get into bed. It’s very slow progress. I’ve been talking to the doctor and he has been saying that it’s going to take weeks, even months to mend. It’s taking quite a lot of encouragement to get on with life at the moment.”

Mrs Williams said the condition of the manhole covers was a “disgrace”.

“Has it taken me to fall to get somebody to do something about it and to realise just how dangerous they are?” she said. “It needs to be fixed as soon as possible.”

Mrs Moola said: “These manhole covers are lethal, especially for someone who is elderly, or has difficulty moving physically, or is blind. It’s another accident waiting to happen.

“This has knocked Elaine for six — and me. It is going to affect us both for a very long time to come.

“It’s about the changes to my life too because I’m not a carer and I’ve been catapulted into this role as a result of this accident.

“Before this Elaine was able to move around and was active for her age — she didn’t need a walking stick.

“My main problem is not just the injury and healing time, it’s the loss of confidence and how that’s likely to affect her and therefore her quality of life.

“She’s on a lot of medication and the doctor has upped it so her pain is more controlled.”

Mrs Moola has contacted Waitrose which confirmed the manhole covers are on its land.

She added: “It has gone to their legal department, which is communicating with us over a compensation claim.

“They have been very good about keeping us informed and have shown great concern.”

Mrs Moola said the GP’s report into Mrs Williams’s injury and recovery would be needed by Waitrose’s legal department and this alone would cost at least £240 while the physiotherapist’s visits were costing £70 a time on top of the cost of additional care.

Mrs Williams is the conductor of Nottakwire, which has raised thousands of pounds for charities and good causes with performances over a number of years.

However, she now faces the prospect of missing several concerts in order to recover.

She said: “I want to get back to it as soon as I can. That is my attitude to life. It doesn’t mean to say I’ll be conducting free of pain but I’ll jolly well do that as well if I can.”

The issue of these manhole covers was first raised by David Gobbett, of Elizabeth Road, Henley.

In a letter published in the Henley Standard in September he said his wife had tripped on one of the sunken covers and fallen, skinning her knee and hands and severely twisting her ankle.

Mr Gobbett said: “She was apparently one of a number of patients attending Townlands Memorial Hospital having fallen at the same location.

“Yet nothing, absolutely nothing, had been done by the highways department of Oxfordshire County Council five working days later.

“This treacherous road condition is still a danger to anyone in Bell Street, crossing the cobbled exit from the King’s Road car park.

“Heaven help elderly and disabled folk until the council does something about the wretched condition of our pavements and roads.”

In November, Mr Gobbett wrote a second letter saying that he had written to the county council, describing the accident and including a photograph of the manhole.

He said that the council replied to his previous letter saying it aimed to respond within 10 working days but in fact nothing had been done.

Mr Gobbett said: “Consequently a dear, elderly friend, who would prefer to remain anonymous, fell at the same place, damaging her hands and knees and shaking herself considerably.”

The county council responded to his second letter, saying it was “currently investigating” the issue.

A county council spokesman told the Henley Standard that the manhole covers were not on the public highway so not its responsibility to maintain.

It refused to say whether Mr Gobbett’s concerns were passed on to Waitrose.

A Waitrose spokeswoman said: “We’re very sorry to hear about Mrs Williams and wish her a speedy recovery.

“We are in contact with her directly and will be making the necessary repairs.”