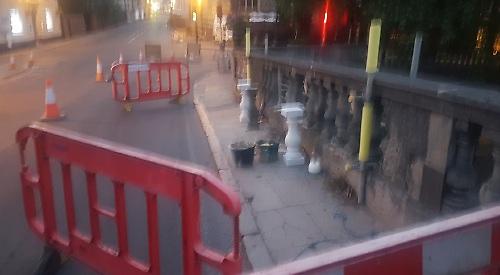 REPAIRS have been carried out to the parapet on Henley Bridge.

The Grade I listed bridge was damaged after a van hit it during Henley Royal Regatta in June last year.

A stone pillar fell into the Thames and another was loosened.

Red plastic barriers had been tied to the bridge to cover the gap ever since the incident.

It took Oxfordshire County Council, the highways authority, several months to obtain permission from Historic England to carry out the repairs.

Then the extended winter delayed the work as the materials could not be used if the temperature dropped below 5C.

Workmen carried out the repairs during Wednesday night last week.

Councillor Stefan Gawrysiak, who represents Henley on the council, said: “I’m extremely grateful that they did it at a relatively quiet time.”

He said the council would now consider repairing the underside of the bridge, which has been damaged after being struck by boats over several years.

He said: “I’m pushing for the council to do a survey of the whole bridge so that we can find out the extent of the damage and the potential cost of repairs. The underneath of the bridge is in a shocking state and as it’s listed we should look after it better than we do.”