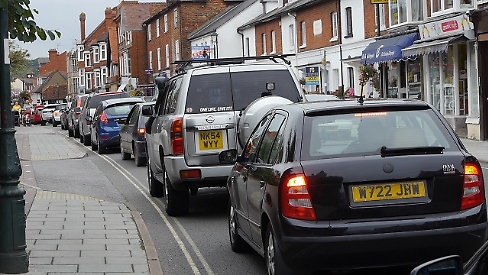 A MOBILE phone app that encourages drivers to share journeys with their friends could be launched on a trial basis in Henley.

Investor Chris Benarr, who lives in the town and is helping to develop it, claims that Skoot would relieve long-standing problems with congestion and air pollution by reducing the number of journeys that people take.

He will give a presentation about its benefits to members of Greener Henley in the new year and hopes the environmental campaign group will help encourage residents to use it.

Information from the trial in the spring, which would
also take place at six university campuses across Britain, could help improve the app before a nationwide launch.

The app, which would be free to install, allows users to share details about journeys they are about to make with the people in their phone’s contacts book and with friends on the Snapchat app. Anyone who wants to share a ride can opt to do so and will automatically pay their friend a set amount per mile through the app as well as a small usage charge.

This has been agreed with Her Majesty’s Revenue and Customs and motor insurance bodies to ensure users cannot make a profit, which would invalidate their policies as they would be operating as an unlicensed taxi. Journey details cannot be shared with the wider public to prevent abuse.

The app will also allow users to rate their friends’ driving after each journey and will monitor distance and trip times to check drivers’ speeds. Those who break the limit will receive a warning and driving advice. It will also plot the best route when there are multiple pick-up points.

Mr Benarr, 40, a former naval officer who moved to Henley with his wife and children in 2013, says Skoot could be useful during school runs, the rush hour or for large events like Henley Festival or the royal regatta.

He said: “Although we’re mainly focusing on university communities, we also wanted to trial it in a market town that has horrific traffic problems and we know there are issues in Henley.

“I suspect that people will use things like Twitter and Facebook to make friends with other members in the area and share rides with them. It could be helpful if people feel the buses aren’t consistent enough and we know there’s a critical shortage of parking places.

“The town council has talked about warning signs to signal when the car parks are full but that will be expensive and this would mean there were fewer cars in the first place.

“I’m a utilitarian by nature and seeing hundreds of near-empty cars all conducting the same journey bothers me on a fundamental level. There’s got to be a way of improving it. I know people have busy lives and won’t always have time to pick up their friends, but if they can share rides just once or twice a week it might make a difference.

“You can’t make a profit from it so the insurance industry is happy with this because it will encourage young drivers to develop a sense of responsibility.

“We would like Henley to embrace this and see the difference it can make.”

Dave McEwen, chairman of Greener Henley, said: “We’ve had a brief chat with Chris and are very interested in finding out more.

“One of our priorities next year will be to encourage more ride-sharing so our initial reaction is positive as it could reduce the number of car journeys.”

The app is not related to SCOOT, the computerised system used by Oxfordshire County Council to manage traffic light timings in Henley town centre.