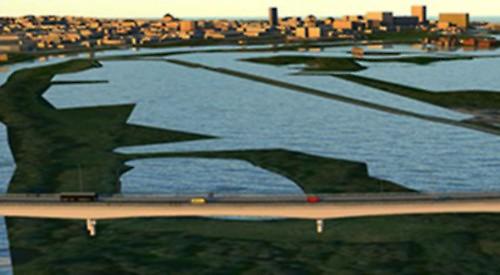 THIS is how the proposed third Thames bridge could look.

These computer generated images were produced by the Berkshire councils which are in favour of the £150million crossing, saying it would ease congestion in and around Reading.

The bridge would go from the A4155 near Playhatch to the Thames Valley Park on the east side of Reading, spanning a distance of a mile over Caversham Lakes. However, councils in Oxfordshire say this would create more traffic on the north side of the Thames without any mitigation measures being proposed.

The two counties’ MPs are similarly divided on the issue, which has been debated for decades.

The Government is now considering an application by Transport for the South-East for £800,000 to fund an outline strategic case for a bridge. A decision could be made shortly, having been delayed by last month’s general election.

A £250,000 outline business case was produced by Wokingham and Reading borough councils and Bracknell Forest Council in 2015.

However, South Oxfordshire District Council and Oxfordshire County Council say the proposal fails to consider the impact of traffic in their areas or the environmental impact of a crossing.

David Bartholomew, who represents Sonning Common division on the county council, said: “The major aspect I am getting nowhere with is the mitigation measures.

“It is a huge project and needs to consider the impact on our roads as well as the ones in Reading.

“The problem with the Berkshire parties is that they tend to steam ahead and only tell us what they have done afterwards.

“If we want to have a proper say in the proposals, we have got to be involved in the outline business case. I feel that we have to contribute to the cost if we want a seat at the table when the discussions take place.

“The Berkshire parties are so determined to get this through, but I am very sceptical about it. It is a potentially huge project. When I first saw the CGIs I described the bridge as vast but that is an understatement.”

Councillor Bartholomew said he wasn’t convinced there was even a case for a traffic bridge.

He said: “If a bridge is going to be built in the context of a climate emergency it should be for public transport, pedestrians and cyclists. Only if it is proven that it is needed should a car-based bridge be built.

“There are lots of local councils tackling their carbon footprint and I don’t understand how this is a positive move in that context. If we are sincere about the climate emergency, we have got to appraise projects on this basis.

“People are still thinking about this project as if it is 10 years ago and it is not really relevant any more. The public mood has shifted significantly since then.

“We have got to look ahead 10 years. If the green light is given to everything and it works out in favour of building the bridge, I would be very surprised if it was completed by 2030.”

Sue Cooper, leader of the district council, agreed that a crossing for only pedestrians, cyclists and public transport would be more appropriate.

She said: “While the council recognises there are congestion issues within Reading and its environs, we cannot support the current proposal.

“We do not believe that a third crossing that would contribute thousands of cars and HGVs on to the roads of Oxfordshire would be appropriate.

“South Oxfordshire will not be party to any proposed scheme which does not seek to address the needs of our district concurrently with the planned construction of any new bridge.

“It is our view that only by considering the entirety of the project — crossing and mitigation — that the benefits, disadvantages and costs of the complete scheme can be holistically assessed.”

Stefan Gawrysiak, who represents Henley on both the district and county councils, said he did not support a bridge for solely public transport, pedestrians and cyclists.

He said: “It has got to take into consideration all users. If you are spending millions of pounds on a bridge, then it has got to cater for as many people as possible.”

But Councillor Gawrysiak said he was also unhappy with the proposal as it stood.

He said: “They have costed the bridge but they have not costed for the extra roads or infrastructure.

“If the bridge is built, traffic will join and leave it at Playhatch and if there is no upgrade to the roads then it will just cause chaos in the area.”

He added that having a third crossing would strengthen the argument for putting a weight limit on Henley Bridge to stop “polluting” heavy goods lorries coming through the town.

He said: “They obviously haven’t read the business case properly because it shows that localities stand to benefit considerably from the proposals.

“One of the reasons we want to work with Oxfordshire is because we realise we need the appropriate mitigation measures, which will protect communities both north and south of the river.

“The outline business case makes it quite clear that it is not just Reading that will benefit from this.

“I know that message does not appeal to some people who just can’t accept the reality that there are many thousands of people from Oxfordshire who want to travel into and through Reading.

“It is essential that Oxfordshire comes to the table and plays its part rather than taking a more childish approach, which has been typical in recent years.

“We all know there is a problem and it needs to be done collaboratively. It can only be achieved by working with us.

Wokingham Borough Council leader John Halsall said: “The authorities in Oxfordshire are inconveniencing their own residents.

“If there is a major thoroughfare from Berkshire into Oxfordshire, of course we would have to build some infrastructure for that traffic.

“It has been discussed for the last 30 years and the rationale is no different.”