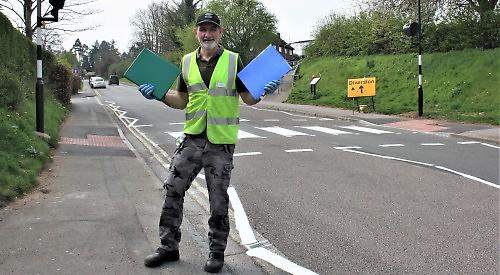 A NEW zebra crossing has finally been installed on a busy road in Henley after more than a decade of campaigning.

Staff and parents at Sacred Heart Primary School, off Greys Hill, have been calling for a crossing in Greys Road since at least 2010 as it is a popular route for pupils walking to and from school.

Now Oxfordshire County Council, the highways authority, has finished the £37,000 project after giving it the go-ahead last year.

The crossing is located near the “pram walk” leading to the Gainsborough estate, along the northern edge of Makins recreation ground, and just up from Takhar Wine Mart at the junction with Greys Hill.

Contractors resurfaced the road with a special anti-skid coating, which the county council paid for, before painting the lines and installing flashing beacons.

The latter will be funded by Henley Town Council using income from the statutory payments made by developers which are building new housing in the town.

Public consultation on the plan was carried out last summer and 129 people were in favour while only five objected.

Supporters said drivers often exceeded the 30mph speed limit in Greys Road and they had witnessed several “near misses” involving children and teenagers.

Opponents said drivers would still park nearby, which would reduce visibility.

Amardeep Takhar, who owns the off-licence, said the crossing would damage his trade by removing parking spaces outside his shop. The county council conducted a traffic survey which found that 4,660 cars passed by on a typical day while 356 people, a third of them children or teenagers, tried to cross the road.

Henley town, district and county councillor Stefan Gawrysiak said: “I’m extremely pleased because this is the first new crossing in the town for many years.

“It will be fantastic for the residents of the Gainsborough estate, The Close and parents taking children to the primary school.

“There have been many years of campaigning and I’m delighted that we have pulled this off at last. Many thanks are due to the town council for funding it.”

Deputy Mayor David Eggleton, who is chairman of the Gainsborough Residents’ Association, said: “It has taken many years of discussion to get this in place and I’d like to thank everyone who persisted in getting their point across.

“With the increase in traffic today, you have to take these measures because a straight road like this is bound to lead to speeding and we have to do everything we can to keep our children safe.

“My children don’t go to Sacred Heart any more but I think a lot of younger families will feel safer knowing this is in place.”

Cllr Gawrysiak is campaigning for two more crossings near the entrance to Swiss Farm in Marlow Road and in Gravel Hill.

These would also require consultation, which cannot take place while restrictions are in place to limit the spread of covid-19.

A 20mph speed limit was rolled out across the entire town centre in February.