MOTORISTS will be able to use Whitchurch Bridge free for five days when it finally re-opens on Friday.

The crossing has been shut for refurbishment since October last year and was originally due to re-open in April but this was delayed twice.

Workmen have been reinforcing the underside with steel girders so it can cope with modern traffic levels.

The bridge will re-open to pedestrians tomorrow (Wednesday).

The toll-free period will begin at 5pm on Friday following an opening ceremony at 3pm featuring a de Dion car from 1902, when the current bridge was built.

Tolls will be collected from Wednesday, September 24 at 11am.

Geoff Weir, secretary of the Whitchurch Bridge Company, has said it will probably apply to the Government for permission to raise the 40p cash toll because the rebuild cost £2 million more than the original budget of £4 million due to the delays.

The cost of crossing on a pre-paid concessionary card is to increase from 20p to 29.4p. This does not require the Governments consent.

The company has installed new collection equipment at the tollhouses which it says will allow people to cross more quickly.

It took longer than expected to dismantle the old bridge as it was found to be at risk of collapse. The work was then put on hold due the flooding and high river levels in January and February. 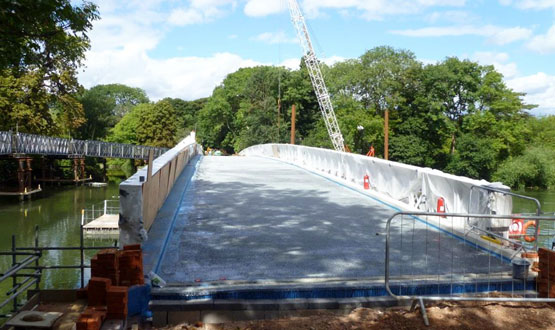