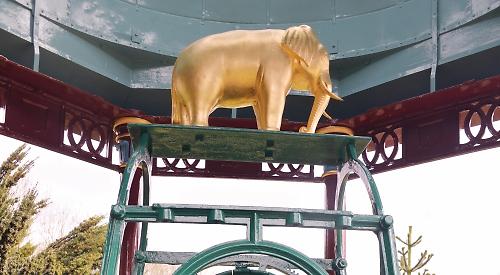 THE Maharajah’s Well in Stoke Row has been officially re-opened after a £25,000 restoration.

A pink ribbon in front of the Victorian monument in Main Street was cut by seven children from the village at a ceremony on Saturday.

The restoration was carried out by Allum Signs and Graphics, of Woodcote, and included repainting the elephant and spire with 24-carat gold leaf using 150-year-old methods.

The well is redecorated every 10 years and the same company has been doing it for more than 30 years.

The work was paid for by the Maharajah’s Well Trust, which receives most of its income from renting out the wellkeeper’s cottage next door.

About 50 people, including Henley MP John Howell, attended the ceremony. Trust chairwoman Catherine Hale gave a short speech before the ribbon-cutting, which was carried out by nine-year-old Sam Preedy, with help from his sister Lottie, five, Nina and Chloe Govett, both 10, Henry Pether, three,  Harry Dougherty, one, and Leo Daniels, four.

After the ceremony, tea, coffee, cake and Prosecco were served in the village hall.

Mrs Hale said: “You can really see the difference and how much brighter the colours are. The well continues to attract a steady stream of visitors to the village.”

“We have just supported tourism week in Oxfordshire and it’s good to see this part of the tourism offering looking so good.”

“The community here have been looking after it for more than 150 years. It is an attraction and it’s well signposted.”

The well, cottage and adjoining orchard have been held in charitable trust since 1863.

They were given to the village by his highness Ishree, the Maharajah of Benares (now Varanasi), due to his friendship with Edward Anderdon Reade, from Ipsden.

The pair  worked closely together after Mr Reade spent 34 years working as lieutenant governor for the North Western provinces in India.

One of his deeds was to create a well to help the community in Azimurgh in 1831.

The Maharajah suggested a well in 1863 as he wanted an endowment in England.

He never visited the well so Mr Reade opted for an oriental style so that it would look striking when photographed.

It yielded 600 to 700 gallons a day with its two nine-gallon buckets on a pulley. It took 10 minutes to wind each way.

To complete this work the monument was taken apart and rebuilt. Since then regular maintenance work has taken place.

Mrs Hale said: “When the first major refurbishment took place the canopy came off and it was completely dismantled.

“This was due to it being in such a poor state of repair. After that the trustees made sure the maintenance was regular.”