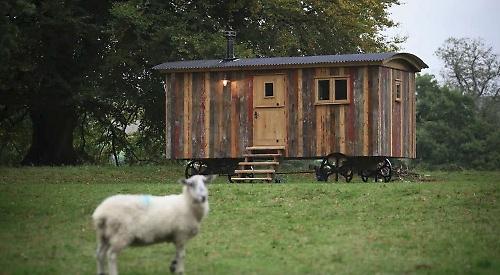 THE owner of Stonor Park wants to start a glamping business in the grounds of the historic country estate, writes David White.

The Honorable William Stonor, whose family has owned the Grade I listed house and grounds for more than eight centuries, and his wife Ailsa have applied for planning permission for six “shepherd huts” for guests.

The couple took over the custodianship from William’s parents, Lord and Lady Camoys, in April 2016 and have invested in adding to Stonor’s appeal as a visitor attraction to increase revenue and help meet maintenance and running costs.

The planning application says: “By doing this they hope to ensure the long-term survival of one of Britain’s oldest stately homes, which has been lived in by the same family since 1150.

“These investments have so far included a large adventure playground for children, the growth of the tourism-related team at Stonor and the hosting of a variety of new events. However, these in themselves will not provide the necessary income required to achieve the aim that has been set out. As with so many stately homes, Stonor Park needs to continue to further diversify its activities.

“The establishment of a new glamping business consisting of six sensitively sited shepherd huts has been chosen as an additional business stream which will complement Stonor Park’s existing tourism enterprises and be of benefit to the local tourism infrastructure.” The huts would be made partly from recycled wood and insulated with wool and supported by four cast iron wheels on a concrete base.

They would sleep two to four people and each one would be fully self-contained with its own bathroom and kitchen. There would be a communal eating tent and sauna.

Guests would be provided with firewood for the wood burning stoves rather than collecting firewood from the estate. The huts, which would operate all-year round, would be situated about 500m south of the house on high ground overlooking the valley and would have trees planted around them. They could not be seen from the house and would not have a view of the house.

In 2017 the estate created a new woodland adventure playground called the Wonder Woods.

Last year it was granted a new premises licence to host an unlimited number of shows, fairs, live music and other events and to sell alcohol from 10am to midnight every day.

South Oxfordshire District Council, the planning authority, will make a decision on the latest plans by January 17.