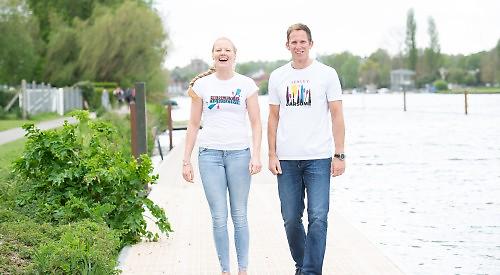 AN entrepreneur from Henley says he has got this year’s summer must-have.

Paul Carey, 47, is launching a range of T-shirts for men and women that celebrate the town and pay tribute to its rowing heritage.

On the front is the slogan “Henley is oarsome” with a brightly-coloured design featuring rowing blades.

Paul, who lives in Reading Road, said: “I’m launching this range in June to celebrate our awesome town. I have always got ideas and I have always wanted to do a T-shirt range and this is just the time to do it.

“I realised that Henley didn’t really have any stand-out summer T-shirts or anything like that so then I came up with the slogan ‘Henley is oarsome’ — I didn’t have to think very hard but it really works.

“The thing that helps sets Henley apart is its incredible rowing history and the royal regatta.

“There is a lot of old-fashioned stuff like postcards but it is all a bit traditional and I wanted something new and more modern.”

Paul, former general manager of the Rewind South festival, used his old contacts to find a merchandiser to produce the shirts and worked with a local designer Julia Welburn to make his vision a reality. He said: “I wanted something really bright and visually captivating and incorporating rowing. I started off with Temple Island. We went from there to the blades and I think the end result is quite summery and eye-catching and I really like the bold colours.”

The cotton T-shirts come in small, medium, large and extra large and cost £20 each, with £1.50 from each sale going to Sue Ryder.

“Everyone I have shown them to has liked them,” said Paul.

He arranged for a fashion shoot with Olympic rowers Matt Langridge and Polly Swann as the models.

Paul says: “They loved them and have shown them to their wider Olympic rowing friends so hopefully it is going to be a summer must-have. This year I am starting out with white and we will see how it goes and maybe have different colours in the future.”

He will also be producing tote bags. Paul, who is married to Julia, a jewellery maker and anti-plastic campaigner, says: “People can go to the regatta and take a bag, which are really useful and can be a fashion accessory.

“It would also mean fewer plastic bags — we don’t want to put any more plastic in the ocean.”

Meanwhile, his portable bar will be in use during the royal regatta and Henley Festival.

The bar, which is made from three shipping containers and can be disassembled and modified to suit any event, will be based at Phyllis Court Club, overlooking the regatta finish line.

Paul, who previously spent 20 years working in the music industry promoting artists including David Bowie, Elton John and Shirley Bassey, added: “Phyllis Court are using it as a champagne and Prosecco bar.

“It will be right at the riverside overlooking the finish line and will be a great place for people to enjoy the rowing and the music at the festival.”