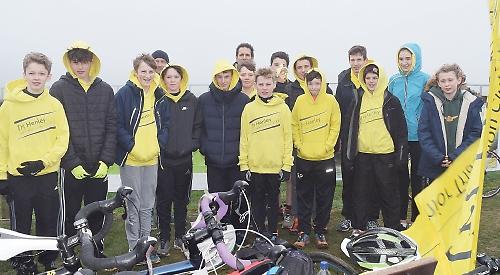 HENLEY junior triathlon club athletes put in a good performance at last Saturday’s duathlon at the Odd Down Cycling Circuit in Bath.

The duathlon followed the usual run, cycle, run format in which 21 tri Henley athletes competed across the U12, U14 and U16 race categories. The fast, winding cycle course, and the fog and fierce wind on the day made for difficult racing conditions, but played well into the training of the Henley athletes in cornering and aero-positioning techniques.

The fully subscribed event included top junior triathletes from the region. Highest placing for Tri Henley was Adam Hunt in male U14, finishing joint third after a 1.5km run, 7.5km cycle and 800m run and a dramati c dive over the finish line. In the same race bothers Ben and Ollie Doyle finished 10th and 12th respectively.

In the U12 male category over distances 1.5km run, 5km cycle and 600m run, Harvey Doyle, of the same family, placed sixth, and in the U16 youth category, after a gruelling 3km run, 15km cycle and 1,500m run, highest position for Tri Henley went to Scott Barnett in sixth place, followed by Sam Jarvis eight and Hugo Warner 11th. All other Tri Henley athletes finished strongly.