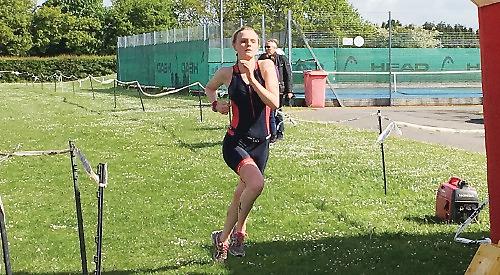 HENLEY Triathlon Club travelled to Portsmouth on Monday to compete in an Aquathon even hosted by Tri Chapel Triathlon Club — the principal junior tri club in the South Central region.

The competition was part of the British Triathlon South Central junior race series, and comprised a pool-based swim followed by run circuits.

Tri Henley athletes competed across the U12, U14 and U16 race categories. With up to five to a single lane, the swim leg was just as much a test of nerve as it was of swimming technique, with athletes saving time if able to overtake their competitors in daring high-speed sprints and tumble turns, or saving energy by drafting in the wake of faster swimmers.

The run leg followed a zig-zag course on grass over a series of 1km laps. To add to the overall challenge, the first waves of competitors exited the swimming pool under a hot sun, whilst the final wave met a heavy downpour of hail.

Although up against the largest junior club in the region, which included a number of GB junior athletes, Tri Henley performed admirably, with podium positions for Ollie Doyle (third in U14 male) and Amber Richards (third in U16 female) while Harvey Doyle finished fourth in the U12s.