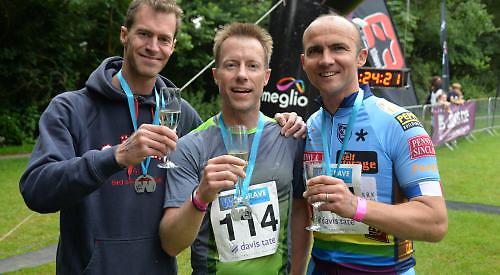 A TOTAL of 138 people took part in the fourth annual Wargrave Sprint triathlon.

Seventy men, 20 women and 16 teams of three people all took part in Sunday’s event, which was incorporated into this year’s Wargrave Festival.

Competitors gathered at Mill Green from 6am before taking on a 750m swim in the River Thames, a 20km cycle ride and 5km run around local villages.

The fastest individual competitor was Nick Fearnhead, who finished in one hour, nine minutes and 35 seconds followed by Pete Harrison 19 seconds later. Hal Stephenson was third in one hour, 10 minutes and 22 seconds. Sophie Whitworth, of St Andrew’s Road, Henley, was the first woman to cross the line. She came ninth overall with a time of one hour, 15 minutes and 22 seconds. She said: “It was really hard and I’m shattered. You always feel you don’t want to do it but I really enjoyed today.”

Henley town councillor Laurence Plant competed with Tony Robinson and Richard Price as Team Meglio, which was the fastest team to finish in one hour and three minutes.

Each man took on one of the three disciplines.

Councillor Plant, who completed the cycle ride within 32 minutes, said: “It was really good, challenging to start and challenging to finish. It was tough going up some of the hills.”

Julia Wybrow, from Wargrave, competed as Splash Flash Dash with friends Rabea Hands and Lisen, finishing in 12th place in a time of one hour, 36 minutes and two seconds. Ms Wybrow, who completed the cycle section in under 48 minutes, said: “The hills were quite hard but it was actually quite a good road.”

“I think this is a great community event. There’s always loads of friendly faces and it’s just really lovely and social.”

Tom Stone, of Wargrave Hill, finished in seventh place in a time of one hour and 15 minutes and crossed the line with his daughter Jemima, five.

He said: “I had a really good time and it was amazing to cross the line with Jemima.”

Organiser Jo Maundrell said: “It’s just a great, great event. I like seeing everyone compete and really enjoying themselves — and their satisfaction when they finish.”