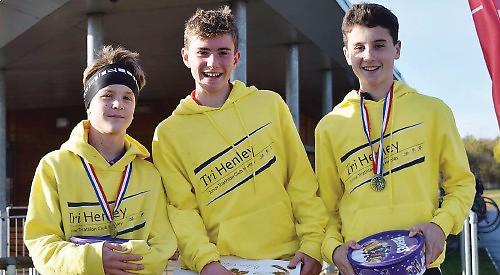 On a sunny cold morning, 21 athletes from Tri Henley competed over their age category distances, each race a combination of initial run, cycle circuits and a second run.

The cycle legs were all on a fast, closed-road circuit, with short hills, tight corners and fast flats. Will Edmondson, competing in the growing adult section of the Tri Henley Club, took his first ever podium position, finishing a highly commendable third in the male 40+ category, over distances of 3km run, 15km bike and 1.5 km run.

In the junior race series for U16s brother and sister Scott and Isobel Barnett each took first place in their respective categories. In the U14s, the club made a clean sweep of the podium with first place Ben Doyle, second Adam Hunt and third Felix Butterworth. In the U12s Ollie Doyle finished third.

The race took place the morning after the club’s annual awards evening on Saturday, where Adam Hunt was presented with the annual championship cup for the second year running, accumulating the highest overall ranking across the previous 2015/2016 season.

Special guest at the evening was Tom Gregory, who at the age of 11 remains the youngest person ever to swim the English Channel.

Further details of Tri Henley Club can be found at: http://trihenleyorg.my-free.website/