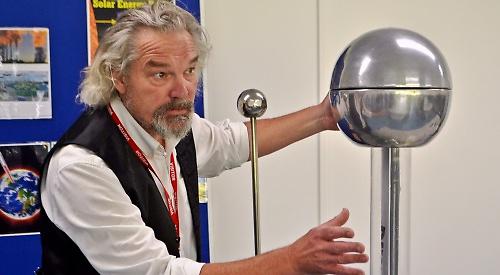 A NEW science and technology classroom has opened at Trinity Primary School in Henley.

The room, called the Discovery Hub, has two long tables in the centre and work surfaces around the outside as well as safety goggles, glassware and other equipment for conducting experiments.

It previously housed a small library but was converted after a group of 32 cyclists, mostly parents and governors, raised more than £30,000 for the school and the Chiltern Centre for disabled children by cycling to Paris in less than 24 hours.

Pupils Milini Knight, Isabella Stobie and Beth Dowley, who are members of the school council, gave a short introductory speech before a ribbon was cut by two youngsters who won a competition to name the new room. They also designed a logo which features a bicycle wheel.

The children then enjoyed a demonstration by entertainer Ian Dunne, who performed a series of experiments and explained the science behind them.

He demonstrated a robotic cat and a Van de Graafe generator, a metal globe which generates static electricity and gives off sparks when a conductive object is placed near it. He stuck strips of thin plastic to it and arranged them like a flower. He also showed the children a model aeroplane with a propeller powered by an elastic band and made a balloon hover in the air by holding a plastic rod above it, which attracts it through static charge.

Mr Potter, whose children Kitty, seven, and Betty, five, attend the school, said: “It’s wonderful to be here today as we could never have imagined having a brand-new classroom, let alone such a well-equipped science and technology laboratory.

“It looks great and it’s rewarding to see the excitement on the children’s faces. Our motivation was, of course, to raise money but a really lovely sense of community has also resulted from our ride. We’ve got to know each other really well and smaller groups of us are off riding somewhere most weekends.

“We want to do another ride next year and our main challenge is deciding what it should be in aid of. We’re thinking of opening it up to all local schools so more children have the opportunity to benefit.”

Later this year the school plans to install kitchen equipment so the children can take part in cookery lessons. They will also use the room to study design technology.

Headteacher Helen Jones said: “This is the kind of facility you’d typically expect to see in a secondary school. It allows us to carry out the kind of experiments you wouldn’t have space for in a regular classroom.

“I was a medical biochemist before I moved into teaching so I’m passionate about science and delighted that we’ll have the freedom to explore it in greater depth. It’s a subject close to my heart so this really is a dream come true.

“I never thought something like this could happen but it’s all thanks to the hard work of our parents and the wider school community.”

Councillor Lambert said: “I was impressed by how the parents have got together and raised funds off their own backs.

“ It’s an excellent facility for the children, who really enjoyed seeing it open.”