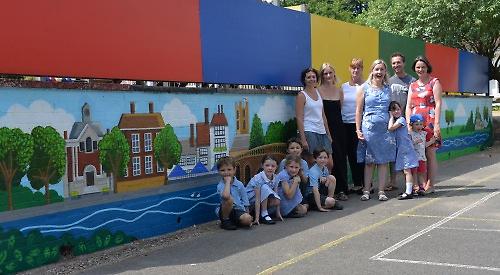 A HUGE mural depicting the River Thames running through Henley has been unveiled at one of the town’s schools.

The painting features Henley Bridge, the Henley Royal Regatta boat tents and buildings such as St Mary’s Church along the banks of the river.

There are also cyclists, including one in the distinctive rainbow jersey of a group of 32 riders who raised more than £30,000 for the school and the Chiltern Centre for disabled children with a ride to Paris last year.

Mrs Newton, whose three children, Barnaby, eight, and five-year-old twins Celia and Edward, attend the school, was asked to create the mural by Joseph Nicholson, who co-chairs the Friends of Trinity School.

The previous mural on the wall had been covered with brown paint. After agreeing on the design with headteacher Helen Jones, Mrs Newtown used acrylic paint to create the image with the help of fellow parents.

She spent up to seven hours a day painting between dropping off and collecting her children.

She said: “It’s the biggest thing I’ve ever painted and was quite a change for me.

“It was very enjoyable and I had lots of helpers who painted the big things like the river.

“It’s a long wall so what could we paint? The obvious choice was the river as everyone recognises it.

“I’m really pleased with how the mural turned out.

“Lots of passers-by have been commenting and every playtime there were lots of children with questions and suggestions.”

Mrs Newton, who lives in Greys Road with her children and husband John, volunteered her time and the school paid £350 for the cost of materials.

Mrs Jones said: “The impression people had was that area of the school was quite dark and dingy. Mrs Newton asked if we would like a mural and when that became an image of Henley we were over the moon.

“We are so excited by what she’s produced. The children love it and passers-by stare at it and then come back later with their cameras.

“We think it could become a tourist attraction. It’s fabulous and we are very grateful.”