Parents give classroom a DIY makeover 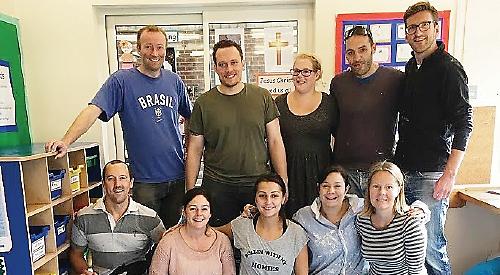 PARENTS of children at Trinity Primary School in Henley renovated the year 1 classroom with support from two local businesses.

The mothers and fathers spent more than five hours filling cracks in the walls, painting and laying new carpet.

The project was organised by Fleur Wells, of Tuns Lane, Henley, whose five-year-old son Luca is in year 1, after she learned that the school couldn’t afford the work.

The Chocolate Café in Thames Side laid on refreshments and fellow parent Tom Armstrong provided the carpet.

Mrs Wells, whose husband George was among those taking part, said: “The walls were in pretty bad shape because of all the staples and sticky tack that had been used on them and the carpet was also in a poor condition.

“We’ve completely transformed the place so I think the teachers will be really happy and will feel more supported by the parents. We all felt incredibly proud when it was over. I’m really grateful for everybody’s help. I think we put in at least 50 hours between us and it would have taken a lot of time and money for a decorator to carry out the work.

“I think the children will be much more motivated to learn now they can take pride in their classroom.”

Headteacher Helen Jones said: “I would like to express my huge thanks to my wonderful parents who spent their weekend decorating our year one classroom.

“It was a ‘wow’ moment when I walked into the classroom on Monday morning and saw the transformation. The children will benefit hugely.

“Thank you again to all parents who volunteer their time and funded this project and made it all possible.”