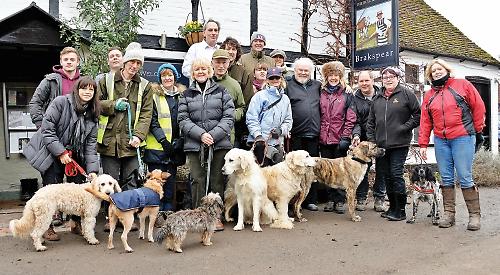 The group set off from the Bull and Butcher pub in Turville on Saturday morning for the two-hour stroll along footpaths in the Hambleden valley.

They returned for sausage and bacon baps cooked by James Orford, the pub’s head chef and landlord.

The walkers then took part in a charity raffle with prizes including a dinner for two at the pub and bottles of wine and biscuits donated by participants.

The event was organised by the pub’s marketing manager Craig Mortimer and raised £1,000 for Stokenchurch Dog Rescue, of which Baker is a patron.

The actor, who lives near Turville, chatted with visitors and signed photographs of himself as the Doctor, whom he played from 1984 to 1986. He owns three dogs which were originally taken in by the charity, Teddy the West Highland terrier and Henry the Jack Russell terrier and a 17-year-old cross-breed called Daisy.

Baker said he enjoyed the morning, despite the cold. “There’s nothing I love more than freezing myself to death,” he said. “It has been a great chance to catch up with old friends and make some new ones.

“Everyone here cares deeply about animals and about this area so the company has been wonderful. The charity does incredible work with animals because it never puts a healthy dog down and won’t just send them off with anyone — the team always makes sure each dog is the right match for the whole family.”

Mr Orford said: “Everyone had a thoroughly good time. Colin is a real character and people enjoyed talking to him. We’d like to run something similar every six months and there’s even been talk about setting up a dog walking club.”