Couple to trek across desert for charity 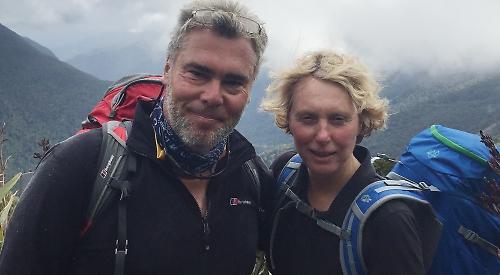 A COUPLE are to hike 100km through the Sahara desert for charity.

Nick and Margot Warner, from Skirmett, will be part of an 18-strong group walking near the Draa Valley in Morocco, about 120 miles from the Algerian border, from Tuesday to Saturday.

They will be raising money for 40tude, a charity seeking a cure for colon cancer, and hope to raise £2,500.

Mr Warner, 53, a partner at estate agent Knight Frank in Henley, and his wife, a conference organiser, have been in training since last summer   when they decided to take on the challenge. They have been going for long walks at weekends or after work.

During their time in the desert, the walkers will be accompanied by camels carrying their food and water as well as the tents they will sleep in at night.

The longest distance they will tackle in a day will be 28km across dunes and dry river beds.

Mr Warner whose mother has diverticulitis, a disease of the large colon, said the purpose of the charity was to raise awareness and education and provide funding for pioneering research at St Mark’s Hospital in London for early diagnosis of bowel cancer.

He continued: “I’ve always wanted to go to the desert and I’m combining it with the opportunity to raise some money for a great cause.

“We’re both very excited, slightly anxious and very keen not to be thwarted by blisters or anything else.

“Everyone thinks the desert is going to be terribly hot but the January temperatures are not too extreme. It’s probably about 15 to 20 degrees during the day but at night it can go down to freezing or just below.

“I’ve just got to remember my passport and to wear my walking boots and hopefully the legs and lungs with allow me to do the rest.”

The couple have paid for the trip themselves so all the money they raise will go directly to the charity.

In 1997 the couple took part in the BT Global Challenge, a round the world yacht race and in 2016 Mr Warner took on paddleboard marathon on the River Thames for the charity.