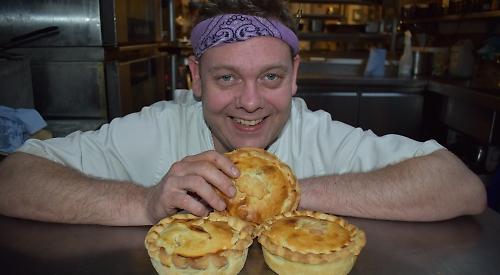 PIES have long been a staple of British pub grub.

Now the Bull & Butcher in Turville can proudly boast to customers that its recipe is an award-winner.

A venison pie made and served at the Holloway Lane pub has collected a gold award at the 2019 British Pie Awards.

Gold is the competition’s top accolade and rewards entries that meet the highest standard of pie-making across the country.

The pies are judged on a range of criteria including pastry, filling, baking and appearance.

The pub’s lamb and mint pie received a silver award while its overall entry of five pies scored highly among judges.

James Orford, the pub’s proprietor and chef, decided to enter the competition after rave reviews from customers about his pies, which he started serving last year.

Previously he offered only a “basic” pie consisting of a pastry lid and a choice of fillings.

“Really a pie should have a bottom and sides,” said Mr Orford. “But the pie was very popular so we thought, ‘let’s take this to the next level’ and it has kind of taken off. We have a pie board which says which ones we have and as these are bought they are taken off. Customers can see them being made in our kitchen, which is nice.

“Entering the pie championships was a suggestion and we thought, ‘let’s have a go’.”

Mr Orford, who has been a chef for 25 years and took over the pub in 2014, usually offers six varieties of pie and he entered three others in the competition — steak and ale, chicken and mushroom and the vegan option of roasted root vegetables and pearl barley.

He also makes a pork and apple pie as well as a steak and kidney suet pudding.

It was only when he arrived at the contest in Melton Mowbray in Leicestershire, historic home of the pork pie, that he realised the quality of his competitors.

Mr Orford said: “Mine is a small business and these were the biggest pie-makers in the country, so to come away with a gold and silver is really fantastic. I’m really chuffed.

“I didn’t get an award for the other three but I wasn’t far below so for a first go I was quite pleased.

“I was talking to one of the organisers who said my pies showed a huge degree of consistency.” So what’s the secret to the perfect pie?

Mr Orford explained: “A good all-butter pastry is important and to make sure it’s evenly rolled. Fillings have got to be moist but not overly wet. The pie has got to be nicely glazed and hand-crimped and then baked accurately.

“We’ve made thousands of pies now and have got quite good at it!

“We make everything here. The pastry is hand-rolled and the fillings are all made here and locally sourced. Bits and pieces come from the fields outside so it’s as local and fresh as that.”

He plans to frame his awards and hang them on the pie board in the pub and hopes his success will attract more customers.

Mr Orford said: “That was the main purpose and hopefully that’s what it will do.”

The awards, which are now in their 11th year, attract competitors from across the UK. This year there were 886 entries from 176 pie-makers, butchers and bakers.

The Supreme Champion award for the overall best pie went to a vegan curried sweet potato and butternut squash pie made by Somerset butcher Jon Thorner’s.