Historic home that starred in film 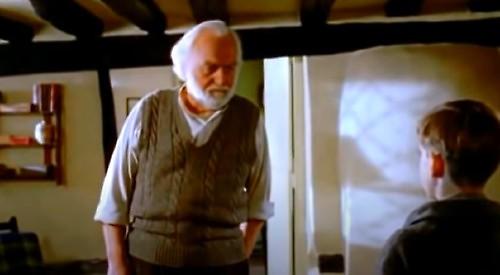 AN historic cottage in the heart of Turville which featured in the film Goodnight Mister Tom is on the market.

Sleepy Cottage in School Lane was used as the primary location for the 1998 drama, which starred the late John Thaw.

The actor played a curmudgeonly widower who takes in a nine-year-old evacuee from London.

The cottage has also featured in the Vicar of Dibley, Chitty Chitty Bang Bang and Midsomer Murders.

Historically, it was the home of “The Sleeping Girl of Turville”. Ellen Sadler lived in the cottage with her family but in 1871, aged 11, she purportedly fell into a deep sleep from which she could not be roused for nine years.

The case attracted international attention from newspapers, medical professionals and the public.

Ellen became a tourist attraction and her family made a considerable amount of money from visitors’ donations.

Even royalty took an interest in her. The Prince of Wales, the future King Edward VII, visited Ellen and laid his hands on her, which people in those days believed would cure the sick.

As the years went by and with no sign of Ellen's waking, speculation grew that her illness was caused by her mother, an issue that was never resolved.

In late 1880, soon after her mother’s death, Ellen awoke. She later married and had at least five children.

Now the three-bedroom property is on offer for the first time in more than 20 years. It is being marketed by estate agents Savills with a guide price of £795,000 for the freehold.

The cottage is located in the centre of the village, set back from the green, with the church and the pub at either end.

The sitting room is the centre of the house with a brick fireplace and log burner.

The dining room has views to the front over the green.

The kitchen has storage by way of a large larder cupboard. On the first floor, the master bedroom has a feature vaulted ceiling with the original timber beams exposed as well as a view to the front overlooking the green, St Mary the Virgin Church and the hill up to the Cobstone Windmill.

There is a second double bedroom and a third bedroom/study as well as a main bathroom and a separate shower room.

Outside, there is a private, partly paved patio garden with a greenhouse which is accessed along the lane across from the house. Parking is by way of a car port further along the lane.

Charlie Chavasse, associate director at Savills, said the property was “a little piece of history”.

He said: “It has been owned by the same family for a number of years and it hasn’t been to the market for a very long time. It’s a very special cottage, steeped in history.

“It has got some real character to it —  a really large fireplace, lots of beams, beautiful brickwork on the external elevation, a real ‘chocolate box’ look to it.

“Savills are fortunate to be in a position where we get a lot of interesting properties with colourful histories and it’s fantastic to have the opportunity to sell this kind of property with this kind of history.”

Turville is surrounded by rural farmland and beech woods, with footpaths and bridleways offering countryside walking and riding.

Henley, Marlow and access to the M40, via junctions four and five, are close at hand.

Mr Chavasse said: “As a place to live, Turville is an idyllic village and very popular.

“It’s a nice little village where everyone knows each other and helps each other out, which makes it a nice place to be.

“Sleepy Cottage might be for someone looking to move out of London with its hustle and bustle who wants a little pied-à-terre in the countryside or someone
downsizing from a larger house.

“It has got quite a broad appeal I think and I’m expecting a lot of interest.”

• Viewing is strictly by appointment. Call the Henley office of Savills on (01491) 843000 or email henley@savills.com