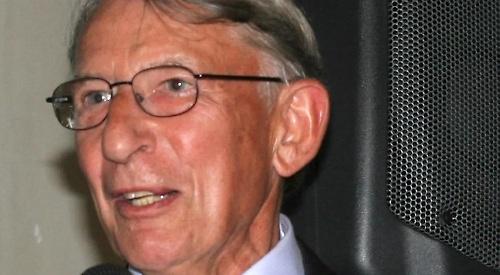 A FORMER footballer who lived in Turville Heath for 45 years has died.

Mike Wicks passed away at home on November 30 surrounded by his family following a two-month hospital stay.

He had celebrated his 88th birthday in September and his 58th wedding anniversary with his wife Sally earlier in the year.

Mr Wicks was an active member of the community and clerk of Turville Parish Council for 15 years.

As chairman of Turville Northend village hall, he was involved in ensuring wider use of the building and helped improve the facilities.

He was associated with Turville Park Cricket Club for 45 years as a player, member and vice-president.

He was also a member of Huntercombe Golf Club in Nuffield for more than 40 years as a player, secretary, treasurer and director. He had to stop playing when he developed severe arthritis. Mr Wicks will be remembered by many as a centre-half for Wycombe Wanderers.

He was a key player in the club’s squad that won the Isthmian League in 1956 and in 1957 and was in the Wycombe team that played at Wembley for the first time ever in 1957.

The famous Sid Cann XI fought their way through five games to meet Bishop Auckland in the final of the FA Amateur Cup. Mr Wicks played in 164 senior games from 1953 before moving on and having a highly successful business career.

He was an executive with Debenhams and Asda and also spent five years in South Africa.

Mr Wicks received life membership of Wycombe Wanderers Ex-Players’ Association three years ago at the club’s annual dinner and made those guests in the know smile when he spoke of the pleasure he had had “running a little corner shop”.

Mr Wicks and his wife had three children, Martin, Carrie and Natalie.

Their five grandchildren include two promising footballers, one of whom plays for League 2 newcomers Harrogate Town.

Another grandchild took part in TV’s Made in Chelsea recently.

Mr Wicks’s funeral was being held at St Mary the Virgin Church in Turville today (Friday).