Pupils stage their own election with animal candidates 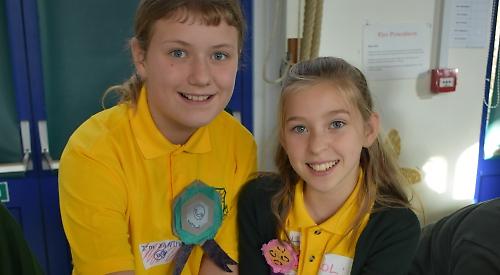 PUPILS at Valley Road Primary School in Henley took part in an election as part of UK Parliament Week.

About 160 children in years one to six voted for one of seven parties, each representing an animal.

The vote followed speeches by year 6 pupils who had been campaigning on behalf of the panda, leopard, elephant, turtle, rhino, polar bear and dolphin.

They explained how climate change, poaching and increasing development were harming the wildlife and its habitats.

The parties included Luv Us Leopards, Elepfund, Hooray for the Turtles, Rhino Rescue, Team Polar, Dolphins For Ever and the Panda Protection Party.

Year 6 pupil Xanthe Heriot, 11, of Elepfund, said: “It’s quite hard to get people to support your cause. To win votes, we made posters and stickers and put them up at playtimes.”

Amy Wheeler, 11, of Luv Us Leopards, said campaigning had been fun. “I have made loads of posters and about 20 billion stickers,” she said.

“I feel strongly about it and sad because people are actually killing leopards. They are cutting down trees and destroying their habitat.”

The winning team was the Panda Protection Party and a panda will be adopted by the school through the World Wildlife Fund.

This will be funded with the £70 that was raised at a hot chocolate sale at the school before half-term. UK Parliament Week is an annual initiative designed to encourage young people to engage in politics.

Year 6 teacher Caroline Lock said: “The children are hearing people talk about politics at the moment and perhaps they occasionally pick up misinformation.