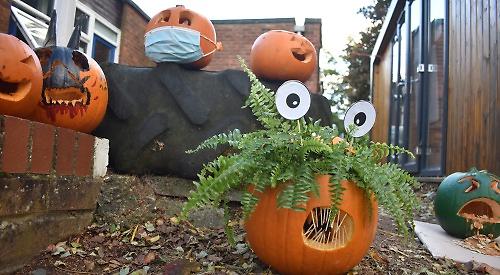 CHILDREN at a Henley primary school took part in a Halloween pumpkin competition.

The pupils each had to take in a pumpkin carved and decorated and wear a suitable fancy dress costume when they went to Valley Road school on Friday.

A total of 76 pumpkins featuring ghoulish faces were placed outside, where they were judged by Laura Holmes, who chairs the school’s parent teacher association, which organised the contest.

Many had been carved to create large teeth and eyeholes or had horns added or been painted a ghostly white while some were adorned with face masks. The children were dressed as witches, devils and skeletons, among other characters.

Year 5 pupil Gabby Haines said she and her family had been up until 11pm the night before finishing her creation.

Classmate Katie Clegg said: “My pumpkin is called Gerry because I think Gerry is the coolest name ever and I’m jealous of everyone that has the name Gerry. He’s smiling because he’s happy he has coronavirus.” The children found out the winners at the end of the school day when they took their creations home again for Halloween.

Ms Holmes said: “The children are all still in bubbles so we can’t have everyone out for a prizegiving but it’s still a nice thing to do for them and their parents.”