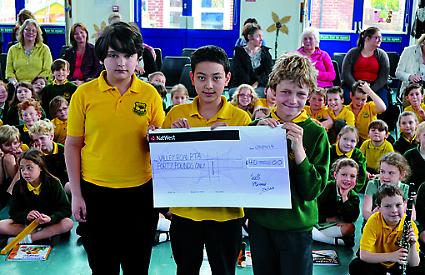 THREE boys who raised money for a new music room at their primary school have been praised by Henley MP John Howell.

The boys raised £40 towards the new room at Valley Road School.

Mr Howell wrote to the boys after reading about their efforts in the Henley Standard.

He said: “I think the stall is a really good idea and shows excellent community spirit. Keep up the good work.”

The boys have since raised another £10 with another stall and plan to continue having one every two weeks. Sidnis mother, Chilli, 45, of Kings Road, Henley, said: “They were chuffed and really happy to raise the money for the school and to get letters from the House of Commons.

They decided they wanted to help a good cause in Henley and they did it all on their own.” Mary Selvester, who chairs the school governors, said: “This is the first money to be raised for our new music room. We are really grateful to the boys. It was great to see them using their own initiative.”

The building is expected to cost £30,000. It will be used for music and dance lessons and will house the schools breakfast and after-school clubs. Mrs Selvester added: “It will be a very versatile building and a wonderful space, particularly because we have so many musical children here.

Children have been practising in corridors and in a small room near the headteachers office so we really need somewhere for them to rehearse.”

The Valley Rock Fest will take place at Shiplake Memorial Hall on Saturday, June 28 from 6pm. There will be local bands performing on two stages, a bar, cocktail hut and food. Tickets cost £20 and will be available from May 2 from In The Groove in Reading Road, Henley, or the school.