‘Two days of fun in a field’ 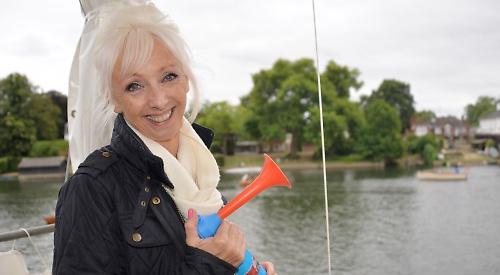 THIS year’s Wargrave and Shiplake Regatta has been hailed a success despite being hit by rain.

There were showers on both days of the 151st annual event, which took place on a stretch of the River Thames between the villages on Friday and Saturday.

More than 2,500 people watched about 600 rowers competing in 365 races with classes including sculling, skiffing, punting and canoeing.

Organisers say takings were only slightly down on last year, when there were thunderstorms and racing was suspended for half an hour.

The competitors raced from Shiplake railway bridge to Ferry Lane in Wargrave.

Spectators gathered in a field at the bottom of Mill Lane, Shiplake, and watched from lawn chairs or enjoyed picnics under gazebos while those in boats moored up to cheer on the crews.

On the bank there were food and drink stalls, rowing machine competitions and children’s activities as well as a ferry service from the George and Dragon pub in Wargrave.

Visitors included former Shiplake resident Peter Simmonds, 82, who first entered the regatta in 1951 and was a founder member of Wargrave Boat Club.

He once won the Vickerman Cup for boys’ double sculls and later won several times in the veterans’ categories.

He moved to Wiltshire in the Sixties but returns almost every year as his son Tim is one of the organisers and his daughter-in-law Caroline regularly takes part.

This year she won the Dongola Grand Challenge Cup, the ladies’ dinghy race and the ladies’ double-sculling skiff.

Mr Simmonds said: “It’s wonderful to see the regatta is still going after all these years. It’s an institution that attracts a wide age group, starting with me and going all the way down!”

The finals on Saturday were judged by broadcaster Debbie McGee, the widow of magician Paul Daniels, who lives in Wargrave.  She announced the end of each race by blowing an air horn.

McGee, who first judged the event following her husband’s death in 2016, said: “Paul and I used to come and watch every year and I love it. It’s so great for the village and it’s fabulous seeing everybody come together.

“You wouldn’t get me in a boat, though — I’m happy just cheering them on from the banks. It looks pretty difficult and I’d be worried about falling in, which happened to a few crews!” Many of the competitors had taken part in previous years and rowed in a variety of costumes including superheroes, coloured wigs, grass skirts and banana suits.

The double punting in canoes was won by past champions Chad and Cedd Burge, from Shiplake, whose family have been competing in the regatta for many generations.

In 1912, their predecessors commissioned the 30ft umpire’s launch Elsie which still serves at the event every year, driven by current owner Paul Foxley, of Riverside, Henley.

The Rutter-Jackson Trophy for Thames dongolas was won for the third year in a row by STBC, which includes David Bushnell, of Bushnell’s marina in Wargrave, with  Julia Frances, Vicki Meyer-Laker, Dan Andrews, Chris Huston and Simon Berrisford. Vintage Vikings, from Shiplake, won the veterans’ dongola on their debut in the event.

The crew comprised Peter Greenslade, Caroline O’Connor, Joe Doyle, Sarah Doyle, Mark O’Connor and Robin Frood, who have all competed individually over the past 20 years.

Mr Greenslade said: “It definitely gets harder as you get older.”

The under-12 dongola final was won by Rock Bottom, from Wargrave, comprising Kit Jeary, nine, Max Meader, Ottilie Kelly, both 10, Charlotte Herrington, Ollie Colvin, both 11, and Ollie’s father Jon, who are all members of the village boat club.

Ottilie said: “It was good to win and we’re all really excited. We’ve all raced before but never as part of the same crew.”

Megan, who also rowed in the girls’ and the mixed junior skiff events, said: “It was good fun and Oliver and Lewis are really happy.”

The jubilee dongola challenge, which was introduced to mark the regatta’s 150th anniversary last year, was won for the second year running by Pogo, from Wargrave.

The crew comprised brothers Will and George Paddison and their sister Charlie Spencer, Mrs Spencer’s children Angus, 11, and Pippa, seven, and George’s wife Donné, who all wore superhero costumes.

Mrs Spencer said: “We’re absolutely ecstatic — it’s marvellous to win as a family and we’ve had a great day.

“We’ve all taken part in the regatta since we were children and think it’s a brilliant event because it brings everyone together and you get a chance to meet people who you haven’t seen all year.

“Now we have children, we can see a new generation coming through to enjoy the regatta and make new friends in the same way we did at their age. It isn’t about professionalism but just having fun.”

The junior dongola was won by the Daring Dazzling Donglers consisting of Meg Hearn, Adam Hunt, Henry Lenthall, Will Rees, Milly Thomas and Ben Doyle, all 15, and former pupils of Shiplake Primary School.

Milly said: “It’s great because we go to different schools now and this is a chance to see each other again. It’s an amazing feeling to have won and we really enjoy catching up too.” Ben also won the 1km open water swim that was held early on Saturday morning.

He finished in 12 minutes and 53 seconds while previous winner and former GB rower Matt McQuillan won the 2km swim in 24 minutes and 48 seconds.

Peter Symons, honorary secretary of the regatta, said: “It went very well considering the weather as we managed to avoid the worst of the downpours.

“It inevitably deterred some people but our numbers were still healthy and the racing wasn’t disrupted.

“As always, we had lots of very close races, which shows how skilled and experienced our competitors are these days.

“The regatta is going from strength to strength and we’re very proud of it. I think of it as ‘two days of fun in a field’ and it serves as a picnic on the riverbank for the two villages.

“Because of our long history, there are families who’ve been coming for three or more generations. The canoe punting remains by far our most popular event but it’s pleasing to see that our junior events are attracting more interest than ever.

“Quite a few people fell in but there were no safety problems and that is just part of the fun!”