Hundreds of crews prepare for regatta 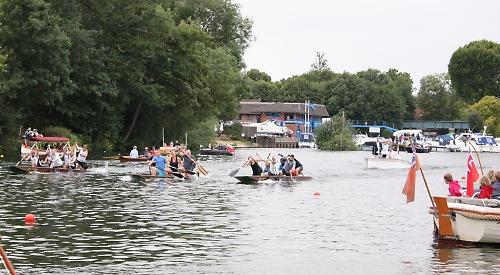 A TOTAL of 475 crews have entered into this year’s Wargrave and Shiplake Regatta, which takes place on Friday and Saturday.

The event, which is held on a stretch of the River Thames off Mill Lane, Shiplake, will feature 362 races in classes including skiffing, sculling and canoeing.

It is also possibly the largest Dongola regatta in the world, with 124 six-strong crews competing in seven different events.

Competitors of all ages will paddle from Shiplake railway bridge to the finish line off Ferry Lane, Wargrave. There will also be a boat for spectators to cross river to the regatta site from the steps by the St George and Dragon pub in Wargrave.

Regatta controller Jonathan Paddison said: “Junior entries are as strong as they’ve ever been and junior sculling is as popular as ever. Entries for the dinghy races — under-15, under-12 and under-12 side-by-side — are strong and the under-12 dongola, where parents steer crews made up of children under-12, has more families entering than ever before.

“But it’s not just the juniors. Entries for the punting in canoe events have maxed out at 89 crews and we’re delighted to be welcoming so many dongolas.

“Its popularity is one of the reasons we hold the scratch dongola on the Saturday. Anyone can enter on the day with a real prospect of winning a medal.”

One of the highlights of the racing programme is the jubilee dongola event. Instituted to mark the regatta’s 150th anniversary in 2017, the event involves crews of six people with up to four adults and a minimum of two children under 12. There are also medals for the “best-dressed” crew.

The regatta’s traditional firework display will take place at 10pm on Saturday.

Guy van Zwanenberg, the regatta’s chairman, said: “The bend in the river forms a natural amphitheatre, which means that everyone from Shiplake and Wargrave can get a really good view of the fireworks, wherever they’re watching from.”

Racing starts at 9am on Friday, with races every three minutes, non-stop, until to 7.18pm. It starts again at 8.30am tomorrow, with prize-giving at 6.30pm.