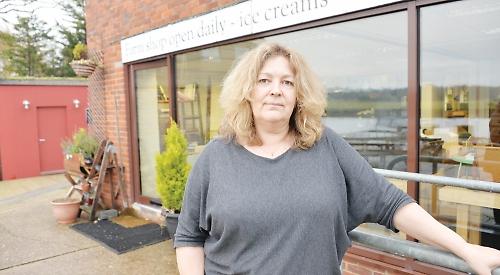 THE owner of an award-winning Wargrave delicatessen says she has been forced to close down because of enforcement action by Wokingham Borough Council.

Alison Hussey, who runs the Local Larder, says the “heavy-handed” council has made it impossible for her to keep the business open.

The council issued her with an enforcement notice in late 2015 for using premises at Val Wyatt Marine within the green belt without permission. She was told she would have to close by July last year but then appealed the notice.

Now she has dropped her appeal, saying she that while she wants to fight the action, she can’t afford the legal costs of doing so.

She stopped trading last month and was moving out of the shop today.

Ms Hussey said: “I haven’t done anything wrong but it would cripple me and I’m anxious about the costs. If I could afford it I would have loved to go to court.”

Ms Hussey founded the business, which sells local produce from more than 50 suppliers, in 2014 and moved into the current shop last year after having a previous outlet elsewhere at the marina.

Then the council issued her with the enforcement notice. Ms Hussey said: “The allegations were, firstly, that there hadn’t been food sold on the premises in the last 10 years but I know locals have photographs showing food being sold here in the Sixties.

“The second was that I forced my landlords out of the offices and forced them to build an illegal structure.

“This office has flooded 12 times in 13 years and that’s why the marina moved out. I moved over here because I was asked to.

“The third was that I was the principal business at the marina because I have such a wide range of stock, which is laughable.

“Because the allegations against me were false and because it’s a beautiful business operating behind closed gates for local people I genuinely thought they would drop it.

“My customers, who pay council tax, want to buy local products. This is the archetypal, perfect local business for them.

“I would think this is exactly what the council is looking for but they didn’t even bother to come down.

“They just came up with the notice, which was very heavy-handed. They didn’t come in with questions or to try to find out anything about the company. I thought if they came down they would take a look at how inoffensive and small the business is and leave me in peace.

“They chose to take it to a public inquiry and I couldn’t afford to fight it legally. They had gone for full costs against me, adding up all the time they spent in the last year.

“I was never going to be able to afford a barrister and even with one there’s no guarantee I would have got costs and it would have bankrupted the company.

“I’m not scary, I haven’t got a multi-million pound business here so why didn’t they just come and talk to me?”

During the dispute, she appealed to borough councillors John Halsall and Bob Pitts and wrote to Prime Minister and Maidenhead MP Theresa May, who is one of her customers.

Ms Hussey said: “It’s been massively stressful for a year-and-a-half and I haven’t been able to make business decisions with it hanging over me.”

In July the Local Larder was named best deli in Berkshire in the Muddy Stilettos Awards, winning more than 36 per cent of the vote. The business also hosted regular food swap events.

Ms Hussey, who has vowed to continue running pop-up shops and selling online, said: “What has been interesting is the feedback from suppliers who are explaining the impact it will have on them. It’s an outlet for them and for those who only have one it will be devastating.

“My customers are devastated too — nobody understands and people are angry at the council.”

Customer Duncan Mackay, from Twyford, said: “We are devastated at the loss of such a fantastic local resource. It conveys all the things we believe in about local food and we are aghast at the situation that Alison finds herself in.”

Councillor Mark Ashwell, executive member for planning and regeneration at the council, said: “In 2015 the owners of Val Wyatt Marine demolished an historic boathouse in a conservation area without permission.

“The space vacated by the original building was changed into a shop, called the Local Larder, in an unsustainable green belt location without planning permission and an enforcement notice was served against this.

“While the council is supportive of local businesses, it considers that they should comply with planning regulations and green belt policy.”

He said it was normal practice for the council to apply for costs against businesses issued with enforcement notices when appeals were withdrawn.