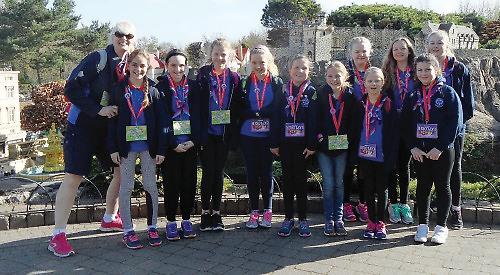 Ingrid and Eva Young, both 11, were part of the Wargrave guides group which visited the amusement park in Windsor.

Ingrid took her promise on board the Vikings’ River Splash ride, while Eva did the same while riding the Pirate Falls log flume.

Other guides took videos of the girls as they read their promises while making the three-finger guides’ hand gesture.

The sisters, who are both in year six at Crazies Hill Primary School, joined the Wargrave guides in January after reading about the group in the Henley Standard. It was their first experience of the organisation as neither was in the rainbows or brownies.

Guide leader Amber Owen said: “It was great fun having the girls take their promises on the rides and we were able to create a long-lasting memory for them at Legoland.

“Both were water rides so they did get quite wet at the same time!”

The Wargrave group was among more than 4,000 guides, brownies and rainbows from the Girlguiding south west region who visited the resort over the first weekend in April.