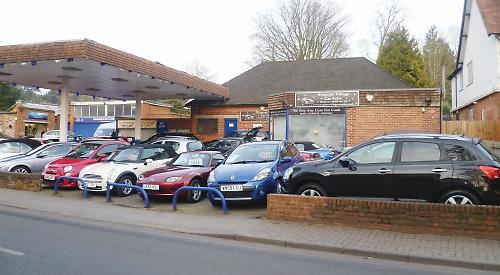 A CAR dealer in Wargrave says he is prepared to go to court to stop the closure of his showroom.

Pete Palmer, who runs Wargrave Village Car Sales in High Street, has been ordered to leave the site by the landowner and developer Oraclemarker, which has been given planning permission to build 10 new homes there.

But Mr Palmer claims the company should honour the two-and-a-half lease he signed a year ago, when the land was owned by the Gilkes family, who ran Wargrave Motors from the site.

The showroom has existed for 70 years.

Mr Palmer, from Maidenhead, said the closure of his business and the neighbouring MOT station would be “tragic”.

“I’m fighting my corner,” he said. “We have still got the lease here and they need to show respect for the existing leaseholder. If not, there goes Wargrave high street as a business area.”

Oraclemarker bought the land from the Gilkes family in November and gave Mr Palmer notice the following month.

The company’s redevelopment plans were approved by Wokingham Borough Council despite opposition by residents and parish councillors.

It withdrew a previous application for 11 homes after the council’s planning officers recommended reducing the number of homes and parking spaces.

Eight of the properties will be in a terrace at the front of the site with the other two to the rear where there is already a house. There will be access at both sides.

The company has also agreed to retain a boundary wall and increase the size of the gardens.

It was granted consent on the condition that an access point at the north end of the site is removed and it provides more information on parking and provision of vision splays for the access on to High Street.

In its planning statement, Oraclemarker said: “The existing commercial buildings and former petrol station canopy are of poor quality appearance and are not considered to make a positive contribution to the character or appearance of the conservation area.

“These buildings would be replaced by a high quality, sensitively designed development, comprising 10 new residential properties. The proposed development has been specifically designed to respond to the constraints of the site and to reflect and respect the character and appearance of the surrounding area.

“The result is a form of development that will successfully assimilate into its surroundings.”

Objectors say the development will be too big and will cause traffic problems on Wargrave Hill and High Street.

Fran Woodard, of Wargrave Hill, said: “The high street already has negligible parking, with many houses without parking, and as a result Wargrave Hill has become an overflow.

“The hill is often dangerously blocked and contains no footpath. We have raised the issue with the council several times and asked for yellow lines but with no success.

“Wargrave is full of narrow roads and there are already many properties with inadequate or no parking.”

Trustees of the neighbouring Woodclyffe almshouses claimed that people visiting the new homeowners might park outside the almshouses.

A spokesman said: “There is no wish to have the almshouses as a gated community.

“The almshouses residents require unimpeded access for their own purposes and for emergency vehicles.”

Parish councillors said they were worried about the increase in traffic and the loss of a business.