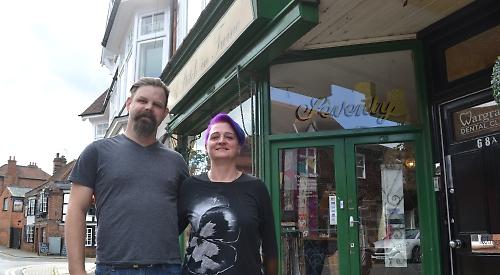 THE owners of a Wargrave upholstery business say they are desperate to remain in the village after being asked to leave their current premises.

Rabea and Alex Hands opened A Stitch in Twine in High Street in November 2010 and have provided services for dozens of residents and businesses in the village.

But in June this year they were given six months’ notice to leave the workshop as the landlord, a neighbouring dentist’s surgery, wants to expand.

Since then Mr and Mrs Hands have spent hours each day trying to find alternative premises in or around Wargrave with no luck. They are now appealing for anyone who knows of any vacant properties in the area to get in touch.

Mrs Hands studied furniture restoration and conservation with upholstery in High Wycombe, while Mr Hands is the fourth generation in a family furniture business.

They met 12 years ago when Mr Hands was a customer of Mrs Hands’s, and married in 2013. They live in High Street with their son Logan, seven, who goes to the Robert Piggott Junior School in the village.

They said they decided to set up the shop in Wargrave after Mrs Hands visited the village in her previous job and now have many friends in the area, while Mr Hands plays for the village’s cricket team. Se said: “I was working for somebody in Nettlebed and there were a few occasions when I would drive through Wargrave and thought it was a lovely village. It was nice and quirky and we moved here in 2005. We have lots of friends here.

“Alex does lots of cushions and I repair antique furniture. This is the right area to be in for that because there are people with stately homes.

“Through the last seven years we’ve built the business through people looking in the window and word of mouth. We’ve got a reputation in the village and around the area and we don’t advertise, so we don’t want to move far.

“We are always taking part in the Christmas events like the advent calendar. It’s a nice community and we donate things like fabric to the schools and the theatre company.”

Mr Hands added: “It’s nice and quite funny in a way. You can’t go anywhere in the village without people waving at each other.”

The business has provided furniture such as chairs to other local shops and restaurants including the neighbouring Weir Grove restaurant, which opened last year.

In 2015 it also auctioned a specially made 2m high velvet chair to help pay for a new swimming pool in Wargrave. The chair, which was on display at the Wargrave village festival ball and fete, was raising money for the Wargrave Lido Fund, which aims to raise £200,000 for a pool at the Robert Piggott junior and infant schools.

Mr and Mrs Hands say the notice from the landlord came as a surprise and they initially decided to keep it private while they looked for new premises.

Mrs Hands said: “It was a a shock as we had plans for the shop, little things like getting the front painted. It’s not the ideal time either. I’m German and Christmas Eve is the main event for us and that’s when we’re leaving.

“A lot of customers have come in and are quite shocked and sad. So many businesses have left the High Street. The antiques business next door has gone and has asked for planning permission to be turned into housing and this is another thing gone.”

Mr Hands added that attempts to find new premises have been difficult so far and that is why they decided to announce to customers that they would be leaving the shop via a Facebook post earlier this month.

He said: “We’ve only just put it out there, we spent the last two months searching for new places for two hours a day and not coming up with anything. We thought if we put it out we might get more luck.

“We had people coming in saying they had heard we were closing down and we said we are just moving but we need somewhere to move to.

“We’ve been looking in a 20-mile radius and sometimes we have found somewhere we liked and phoned up the estate agent to find it’s already gone. That’s frustrating.

“At the moment the main thing is finding somewhere for the continuation of the business. We are pretty much into January with orders.”

The couple say they have already had leads since going public but are looking for a place with a shop window and workshop to allow them to create and display their wares.

Mr Hands said: “There's a million and one offices available but nothing for us as we need to do the work on site. Henley is difficult now, we know more people who are closing rather than opening due to business rates. I spoke to places like Barbara Easton but that didn’t work.

“We need somewhere that’s accessible for customers to come and see us. We need about 100sqm, most of which is workshop space.”

He added: “It’s just sad. We were very nervous when we first opened, which was at the time of the recession, but after a couple of years we could see ourselves staying here for 20 years. It just felt right, it’s going to be difficult to move out.”

Anyone with information can email rabea@gienieupholstery.co.uk