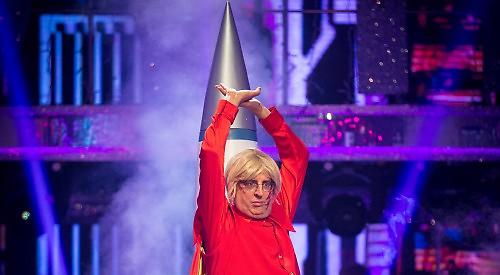 DEBBIE accidentally revealed the name of the latest contestant to leave Strictly Come Dancing hours before it was confirmed on TV.

The radio presenter, who lives in Wargrave, told BBC Berkshire on Sunday morning that she was “very sad” to see the Reverend Richard Coles booted off.

But after realising her mistake, McGee tried to cover it up with an anecdote about how he fell over and needed treatment.

“He fell over at one point and had to be treated and everything else, so now we’re waiting to see what’s going to happen in the results show tonight”.

The results show is recorded on a Saturday after the live show but is aired on Sunday night.

McGee, who at 58, is the competition’s oldest contestant, performed the quick step with partner Giovanni Pernice during Saturday’s Movie Week special.

After topping the with 34 points out of 40 the previous week with their Viennese waltz, the pair picked up 29 points from the judges.

Rev Coles was the second celebrity to leave the show, after Holby City actress Chizzy Akudolu.

He and partner Dianne Buswell paid homage to Flash Gordon in their Paso Doble routine in the dance-off against Simon Rimmer and Karen Clifton.

The 55-year-old former pop star turned priest said he was sorry to leave the competition but admitted he “really can’t dance”.

A full report with more pictures will be published in this week’s Henley Standard, out on Friday.