'Queen' Debbie does it again 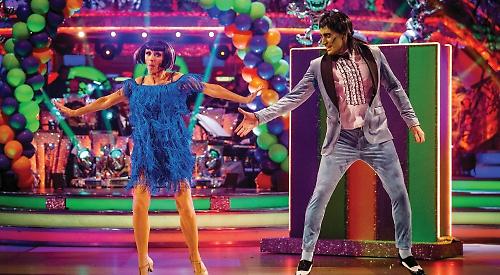 DEBBIE McGEE is counting the cost of a second week on top of the Strictly Come Dancing leaderboard after picking up an injury.

The radio presenter received a standing ovation for her performance on Saturday night’s Halloween-themed live show in week six of the BBC series.

McGee and her professional dance partner Giovanni Pernice were injured during their fast-paced performance of the Charleston, which included several lifts.

The routine began with McGee in a drab floral dress daydreaming about being a prom Queen and bringing Pernice, dressed as Frankenstein, to life.

To the music of Frankie by Sister Sledge, the pair moved around the dance floor before McGee disappeared behind a locker, which Pernice then twisted round to reveal her in an electric blue flapper dress.

The routine ended with Debbie being held in the air by Pernice while stretching her arms and legs out.

Bruno Tonioli joked: “Debbie, Giovanni, I am bitterly, bitterly disappointed... there was nothing horrible about that! It was brilliant, absolutely brilliant.”

Craig Revel Horwood critised the “around the world” lift, describing it as a “little bit clunky” and saying it should be one clean move.

When Pernice admitted this was his fault, Revel Horwood responded: “It still went wrong, darling. I don’t care whose fault it was but it went wrong.” But then the characteristically nitpicking judge added: “I thought it was brilliant. The cross swivel hand hop, which we never see, the Birdie flap was absolutely perfect… clean, precise, absolutely incredible.”

Darcey Bussell told Debbie: “It was fantastic — we are finally seeing this naughty flapper in you. I’m absolutely loving the precision, the speed. How you produce those crazy lifts... you are a fearless, agile woman. I loved it, absolutely loved it.”

Shirley Ballas motioned Debbie towards her and said: “I am going to give you my Queen of Latin crown because you deserve it. You were fantastic. I loved everything about what you did. Everything. There was nothing that I didn’t like. You went for it, you executed it. You were brilliant, well done.”

Presenter David Prever had to step in until McGee could make her way from her home in Wargrave to the studio in Caversham and did his best to fill-in the segments between songs.

He told listeners: “Hopefully she will come in some time but what a performance that was. The thing is, if you have been dancing like Debbie danced last night, even with the extra hour [in bed] this morning, you need a bit of a lie-in.

“Debbie will hopefully pop up in a little while but if she doesn’t we will just jog on merrily for a couple of hours.”

After almost 25 minutes he said Debbie would be in air “any minute now” but in fact she was almost 40 minutes late by the time she finally hit the airwaves. “I am here just about, David,” she said.

McGee told listeners that she had gone to bed at 3.30am and had it not been for the clocks going back to mark the end of British Summer Time, she may not have been in at all.

She said: “After we finished the show last night we were pre-recording some stuff as well so we actually didn’t finish until about 11.15pm.

“I was on a real high from that Charleston. I couldn’t just go home so I did stay a bit later than I should have.”

She then spoke about the costume change during her routine, which she tried only once during rehearsals on Saturday afternoon.

McGee explained: “They were worried that the front might open a little bit so the wardrobe department added about four more lots of Velcro. When I actually went to do it I struggled but it did work.”

She said her late husband, magician Paul Daniels, had always taught her to plan for the unexpected.

McGee said that if Pernice — whom she nicknamed “Geo-stine” — had turned the locker round and she was still in her original dress she would have continued dancing anyway.

“The only thing I worried about was would I get through to the end without being out of breath,” she said.

“That last lift I had to give it an extra punch of power, a bit like a racehorse at the end of a long run. From standing upright, I had to grab the inside and outside of Giovanni’s thigh and do a handstand with me holding his legs and get my leg up and over his shoulder and one down his back, otherwise we couldn’t get into the last two bits of that lift.

“You need some power to do that and in rehearsals that’s sometimes what let me down.”

McGee then revealed that they had both hurt themselves during the dance.

“We were both at physios yesterday,” she said. “I pulled a muscle under my back right rib from the lift in the middle of the dance, which Craig said was clunky.

“Well that was the reason why because I couldn’t help Giovanni because where I pulled the muscle was where I was meant to pull in and Giovanni really, really hurt his shoulder to the point that we were not sure whether we could do those lifts.”

On Sunday’s results show, television chef Simon Rimmer and his partner Karen Clifton became the fifth celebrity to be eliminated after a dance-off with pop star Mollie King and her partner A J Pritchard.