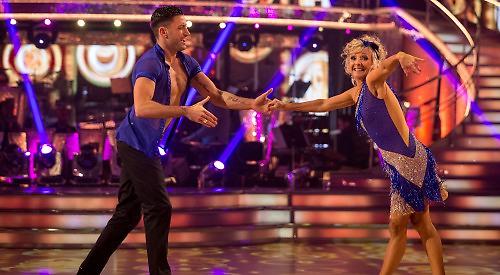 DEBBIE McGEE says she has got her “sparkle” back after reaching the final of this year’s Strictly Come Dancing.

The radio presenter from Wargrave booked her place in the last four after performing two dances — a Latin and a ballroom — on Saturday night’s live BBC 1 show.

All five remaining contestants had to dance twice and 59-year-old McGee and and her professional dance partner Giovanni Pernice perfomed a jive and a foxtrot, receiving a standing ovation for both.

The couple scored a combined total of 70 points out of a possible 80 to put them in joint second place with actor Joe McFadden and his partner Katya Jones and nine points behind the competition favourite, singer Alexandra Burke and professional Gorka Marquez.

For the jive, McGee appeared on some stairs in a purple and gold dress cut above the knee. She danced down to the floor with each step lighting up as she touched it.

She then moved around the floor at high speed in a routine that was full of flicks, kicks and twists as well as waving arms and wiggling hips. McGee even blew a kiss to the judges.

When the couple had finished, co-host Tess Daly said: “That took some stamina, that routine. I think he’s [Pernice] more out of breath than you are.”

Bruno Tonioli said: “Debbie always delivers on time and in perfect condition. It is your timing, it is incredible. It is so sharp, it crackles. You are crispier than a Kettle crisp.”

Craig Revel Horwood told McGee that her facial expressions put him off but added: “Your timing is impeccable and your energy is second to none. You are brilliant.”

Darcey Bussell said she couldn’t believe McGee’s energy, adding: “What are you taking? I want to know — I want some of that.”

The couple then made their way upstairs to the gantry to be met by co-host Claudia Winkleman who asked McGee whether she felt under pressure.

She replied: “He’s 27 and I’m heading for 60. Keeping up with him was very difficult.” But Pernice said: “She did better than me.”

Horwood scored the pair seven points and the remaining judges each awarded them nine to put them into third place at the half-way stage.

For the foxtrot, McGee walked out of the “Strictly Hotel” wearing a black lace and chocolate-coloured ball gown as Pernice, in a dress suit and tails, held the door open for her.

The couple were straight into hold and covered every inch of the floor with rotations and changes of direction. As the dance entered its closing stages, McGee briefly went out of hold and confetti fell from above.

It ended with Pernice on one knee in admiration of McGee who stood with her arms raised as the last golden wisps of paper fell.

Tonioli exclaimed: “Strictly gorgeous” before adding: “If you don’t make it to the final next week I will judge with your tutu, no knickers and a tiara. Top that, Darcey!”

Bussell called the dance “stunningly effortless” and Revel Horwood said he loved it. Ballas said that McGee was “heaven sent” and was the “most beautiful lady”, adding: “I think you are elegant, I think you are gorgeous and I think you had some beautiful sweeping moments and you both looked involved. Thank you for closing our show like that, it was amazing.”

The couple were given eight marks by Revel Horwood and nine from each of the remaining judges, giving them a total of 36 points.

Speaking to Andrew Peach, who hosted her Sunday morning show on BBC Radio Berkshire, McGee said: “I’m feeling pretty good. I’ve had an unbelievably busy week. I’m just kind of glad to get through the dances last night because I was exhausted from going up and down to York doing panto rehearsals every morning and then rehearsing with Giovanni from 2pm to about 9pm. They are long, long days.”

After finishing in third place overall, McGee and Pernice learned they were going through to the final on Sunday night’s results show.

McGee, the widow of magician Paul Daniels, said “Strictly has brought happiness back into my life. It just is such a joy being with everybody and working with Giovanni every day and it’s just a special time of my life.

“I just feel my sparkle has come back.”