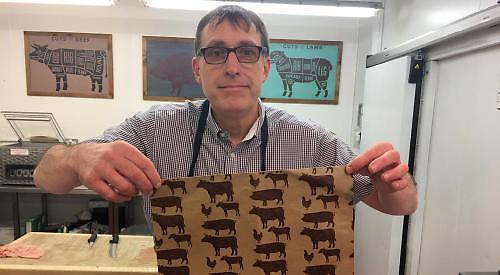 Mark Lowe, who is based at Hare Hatch Sheeplands, says he wants to do his bit to help the environment.

He said: “There’s growing interest in biodegradable bags, which don’t stay in landfill for up to 2,000 years like plastic does.

“I love giving help and advice to customers and if they come to the counter and talk to me they can get a new paper bag, which means it’s one less plastic bag going out to harm the environment.

“A lot of our meat products are taken straight off the shelf, but those have to be in plastic wrapping because nothing environmentally-friendly has yet been invented that will allow us to dispense with plastic.”

Mr Lowe, from Baydon in Wiltshire, has been a butcher for nearly 40 years, having started when he left school at 17, and has worked across the country.

His business, Millard & Lowe, moved to the plant nursey near Wargrave in October. His partner Becky Yapp also works at the counter.

He says it is mainly older people who visit his counter and he would like more younger customers and is always willing to offer advice.

He said: “Younger customers, who are used to the convenience store, tend to take products straight from the shelf. Sometimes they look along the shelves then just walk away without taking anything. If they came to the counter, I could help them find what they are looking for.”

Mr Lowe has won Good Taste awards for his home-made pork pies and home-cured bacon. These are available at the shop along with home-made sausages and a range of other fresh meats.