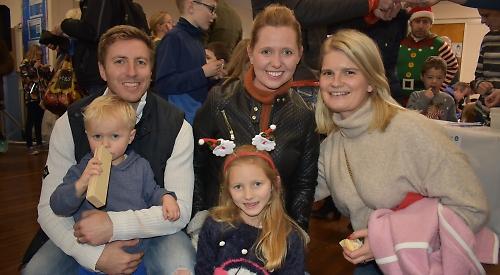 About 500 people attended the event, which was organised by the school’s parent-teacher association.

There were 44 hampers to choose from with gifts, including children’s toys and pamper sets, donated by local businesses.

There was also a raffle, tombola, a children’s games area and a cake stall selling homemade produce. Parents and teachers took it turns to staff the stalls. Children could visit Father Christmas and wrap gifts for loved ones. Mulled wine and mince pies were served.

Sally Reason, who chairs the association and whose younger daughter Scarlett, 10, is a pupil at the school, said: “It was a lot of hard work to put it together. It is important we get it right as it is our biggest fundraiser of the year. I was amazed by the turnout. It was much bigger than last year.

“People were really impressed with the hampers and we always have lots of nice comments afterwards.

She thanked her helpers Nicola Hounsell and Kat Jackson.

Mrs Reason is a teacher at the Berkshire College of Agriculture and lives in Wargrave with her husband, Paul, who is a marketing director. He elder daughter Imogen, 13, is at the Piggott School.