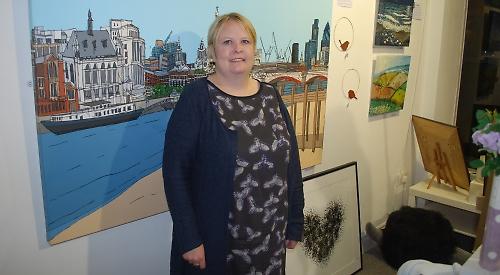 AN art gallery in Wargrave is set to become the latest village business to close down.

The Robin’s Nest, on the corner of Church Street and High Street, is run by Jo Sinclair, who has lived in Wargrave for more than 40 years.

Miss Sinclair, a jeweller, illustrator and embroiderer, revealed the news on her Facebook page.

She said: “It’s with great sadness that my new year sale is turning into a closing down sale. To say I am devastated is an understatement. However, [it is] a sign of the times.”

The gallery is now offering up to 25 per cent off items, both in person and online, but Miss Sinclair may continue to trade through her website after January 21.

The contemporary art and gift gallery opened in February 2015, taking over the premises of the Willow Dress Agency, which closed in December 2014 after only eight months of trading.

Janet Middleton-Stewart, the agency’s owner, said there was not enough footfall in Wargrave to make it profitable and she feared getting into debt if she continued.

She added: “There’s nothing in the village for people to come for. On a normal day most of the shops are closed, it’s just dead.”

Mrs Middleton-Stewart had taken over the unit from Lynne Day and ran it with her daughter Sarah Penny and friend Jane Martin, who ran a repairs and alterations service in the store’s second room.

The gallery is the latest in a series of Wargrave businesses to close or leave. Last year, the Italian restaurant Da Toni closed after less than 12 months, having replaced the Haweli restaurant, which shut in June 2018.

Talbot and Associates, an accountancy firm in High Street, left a year ago.

Victoria News, a newsagent and post office in Victoria Road, closed in August, following repeated attempts by the owners to sell the business.

This has left the village without any postal services.

Wargrave Antiques in High Street, which closed in 2016, is in the process of being converted into a residential unit.

On the positive side, a new podiatry clinic opened in October in the same building as the Wargrave Dental Clinic in High Street.

The Old Post Office café in High Street re-opened as a pop-up shop in November.

Wargrave parish councillor John Halsall, who is also the leader of Wokingham Borough Council, called the closure of the Robin’s Nest “regrettable”.

He said: “As a borough, we are revitalising all our towns and villages. The trouble with Wargrave is it doesn’t have a centre, so it is difficult to say how we could revitalise it. I would be open to all suggestions.

“Twyford is part of Wargrave’s problem in that the lovely people of Wargrave go there and to Henley to do their shopping and it has made the local offer more and more difficult.

“The houses on the high street are mainly private, so there is nothing we can do to intervene.

“Government legislation permits shops to be turned into residential use if there is no possibility of them being turned into successful shops, so we are on a difficult and steep curve but I would love to be able to do something to help Wargrave.”

Fellow parish councillor Marion Pope said: “The high street in Wargrave is dead. It is so sad because years ago there were shops of different sorts and sizes. There is nothing to go into the village for now so it will put businesses like the gallery under more pressure because there is nothing else.

“It used to be such a vibrant high street. There has been a shift in the way people are shopping and they are able to get in their car and get what they need elsewhere.

“I’m afraid we will never get back to the way it was. People need to cherish what we do have while it is still there.”

Before she opened the gallery, Miss Sinclair spent eight years making and supplying jewellery to galleries across the UK.

A year after she opened, she launched an unsuccessful crowdfunding appeal to raise £30,000 with the intention of moving to a bigger property in Henley or Marlow in order to expand her offering and organise workshops with artists.

At the time, she said: “If you want to keep a business going, you need to keep moving forward and I can’t do that here. When places close on the high street it impacts on everyone else.”