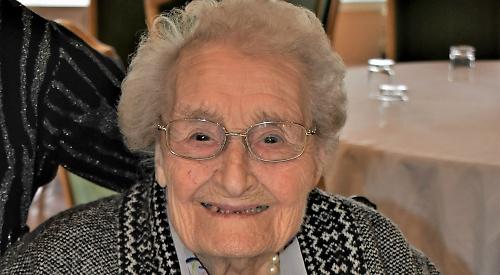 A WOMAN who was responsible for spotting German aircraft during the Second World War has died a day after celebrating her 100th birthday.

Vera Bird lived in the same flat at Elizabeth Court in Wargrave for 38 years.

She lived with her husband Harold until 1995 when he died from pneumonia, aged 84.

Born in Crazies Hill in 1919, Mrs Bird went to school in the village and left when she was 14 to start work as a cleaner.

She joined the Auxiliary Territorial Service in 1942 and spent two years shining lights into the sky to spot enemy aircraft.

She and her husband were married at St Mary’s Church in Wargrave in 1944, having met shortly after she finished her war duties.

Mr Bird’s best man was Bud Flanagan, who was a member of the Crazy Gang and lived in the village. They became friends as the entertainer used Mr Bird’s taxi service. The couple’s only child, Penny Bolton, 74, lives in Sonning Common with her husband Brian, and would visit her mother at Elizabeth Court three times a week.

Her husband had lived in the house with his brothers Gerald and Norman when they were growing up. His parents, George and Margaret, bought the three-bedroom detached house in 1920.

In 1941, George, a chauffeur, was killed when a car fell on him and his widow struggled to cope, so she bequeathed the property to Harold.

Mrs Bird was a member of the Wargrave branch of the Royal British Legion and was the standard bearer for 25 years until the women’s section was closed.

She celebrated her birthday three days beforehand with a family gathering at Hennerton Golf Club, which was attended by about 45 people from as far as Lincolnshire, Derbyshire, Southampton and
Plymouth.

On her birthday itself, she was visited by Mrs Bolton and was inundated with phone calls.

She received several bouquets of flowers, dozens of cards and telegrams from the Queen and Therese Coffey, the Work and Pensions
Secretary.

Mrs Bird was full of praise for the staff at Elizabeth Court, including the current home manager Jennifer Hayward, whom she described as “an absolute treasure”.

She had an older brother Thomas and older sister Dora as well as a younger sister Joan who all predeceased her.

Her father, Thomas, was a gardener in Crazies Hill and worked for Sir Campbell Rhodes, who was a prominent figure in scouting.