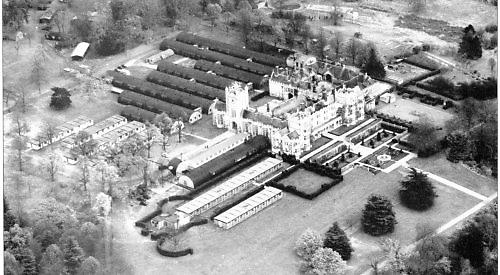 ALDON FERGUSON recalled the Military Photographic Interpretation at Danesfield and Phyllis Court with a fascinating illustrated presentation at the January meeting of Wargrave Local History Society.

He began by explaining that photographic interpretation was not looking at nice landscapes or holiday snaps but a serious and scientific process.

Military leaders had long wished to know what the enemy was doing and the act of examining photographic images enabled objects to be identified and their significance assessed.

The first aerial surveillance came in the First World War, when an observer would ascend in a basket below a balloon tethered to the ground. By means of a phone cable he could give directions to those on the ground as to where to aim their guns. It was hazardous, however, as the observer was in a vulnerable position, not least because the balloons were filled with hydrogen.

The next development was to use aircraft to take a camera up to record the scene. The large bulky cameras had to be held out over the side of the plane, the photographer also having to act as the gunner in the rear of the plane.

The images were captured on glass photographic plates, a fresh one needed for each picture.

In due course, the camera would be fixed to the side of the aircraft and then inside the plane, between the pilot’s feet, so he could take the pictures. It was important for him to know where he was when each picture was taken as there were no navigational aids at that time.

From the photographs, maps were produced showing the enemy positions etc., so that by the end of the war, the entire Western Front was being recorded at least once a day.

Interpretation skills had not been developed then but the military commanders could see the build-up of troops and materials taking place.

When the war ended it was not thought important to continue with this type of work so the expertise that had been acquired was lost.

However, Sidney Cotton, an Australian who had flown with the Royal Flying Corps during the war, created Aerofilms at Wembley, taking aerial photographs of many “places of interest”.

He had good contacts, including George Eastman of Kodak and Winston Churchill. Cotton also developed the Dufay process, an early form of colour film. He travelled across Europe to sell the film and realised — long before the Second World War — that photographs taken over Germany would be of interest.

MI6 knew that he was friendly with high-ranking German officers and it was arranged that Sidney would surreptitiously take photographs while on visits.

The Government bought him a Lockheed 12A Electra Junior plane fitted with two cameras, each hidden behind a motorised flap in the wings. Cotton also developed a teardrop side glass to the cockpit so that he could look out and see what was below him to be photographed.

He was so accepted by the Luftwaffe officers that when one asked to be flown over his mother’s house, Sidney agreed — and took pictures of the land below as he did so.

The motto of the “Cotton Club” was “Thou shall not be found out” and he was able to fly 15 covert missions over Germany before the war as well as photographing the German naval fleet only two days before war was declared.

The RAF’s Spitfires and Hurricanes were in high demand but Cotton wanted two Spitfires for photo reconnaissance work and eventually persuaded Air Chief Marshall Hugh Dowding of the need. The planes had their guns, armour plating and radios removed so they could fly very high and fast and had two cameras fitted under the wings and two more under the fuselage.

The RAF formed its own photo reconnaissance unit, based at RAF Benson, with some planes operating from Wick (where they could cover activities in Norway), and St Eval in Cornwall (where they covered the French coast). The photographs from all three were sent back to Benson and then taken to Medmenham for examination.

The pilots flew alone and unarmed at altitudes of up to 40,000ft, the planes being painted pale blue as a form of camouflage. Sadly, if a pilot was lost, nobody knew where they were due to the missing radio.

The missions flew over target areas to identify, for example, the number and type of German planes and where ammunition was stored. The definition in the photographs was so good that individual people could be picked out.

The ships of the German navy were recorded. Many were held in the Norwegian fjords and the crews were aware of the activities of the photo reconnaissance pilots so would generate smoke screens when the weather was set fair. The pilots also faced anti-aircraft gunfire, making their task hazardous.

Other tasks involved flying at low level to record the beach defences for D-Day. That meant photographing the entire coast line from Denmark to France, so that no clue might be given as to where the invasion was to take place.

The pilots also took before and after images to show the damage done, for example, to the Mohne dam in the Dambusters raids.

The process of interpretation of the photographs took place in three stages. The first was the immediate viewing at the airfield where the pilot landed.

Once the images had reached Medmenham, where the photographic interpretation unit for the entire operation, including the US forces, was based, they were carefully examined and a first report produced.

Danesfield House was a boys’ school when the RAF took it over in 1941 and built huts for the hundreds of staff who worked there.

As the analysts’ expertise developed, more specialists were used, for example, to use the ecology to assess what might be happening, or the type of factory to be seen.

All the pictures were kept and carefully indexed so that any changes taking place on the ground could be seen.

Many of the people who worked at Medmenham were women, as they were considered to be more diligent than men.

One of them was Constance Babington Smith, who was a journalist for The Aeroplane magazine before the war so was used to examining photographs of aircraft and airfields.

At Medmenham, she noted “something unusual” in pictures at Peenemünde, which matched information from spies about strange activities. By knowing the day and time of the images, the unusual height of some of the buildings could be calculated from the shadows they cast.

This was the base where the V1 Doodlebug flying bombs and V1 rockets were being developed and Constance was able to interpret the pictures by very careful examination of old and new pictures.

The discovery meant that the Germans moved the work underground, which severely delayed its progress.

Other women who worked there as photographic interpreters included Lady Charlotte Bonham-Carter and Sarah Churchill. It is said that the latter sometimes knew more than her father, Winston Churchill.

As the war progressed, Medmenham was bursting at the seams, so Phyllis Court was acquired, initially for use as the officer’s mess for the women of the WAAF and later for other sections of the Medmenham work, including the model making.

Photographs taken of a chateau on the French coast in December 1941 revealed a mystery dish-shaped object near the cliff top. From the pictures, a model was made, so that all those involved in a subsequent raid had a copy of it.

The Germans were taken totally by surprise when the radar station was dismantled and removed by submarines.

Models were also made of the locations targeted in the Dambuster raids.

Further expansion of the Medmenham activities meant that additional space was needed, so the map making work was moved to Hughenden Manor, which was renamed RAF Hillside for the purpose.

The work undertaken at Medmenham was on an enormous scale. By the end of the war, 25,000 negatives were being received daily and all had to be indexed, studied and interpreted.

Copies were also made for Bomber Command and at one stage about 60,000 prints were being made daily. Over the course of the war Medmenham produced 36 million prints.

It is thought that about 80 per cent of the intelligence gained about Nazi-controlled areas (from the North Cape to Italy) was by means of photographic reconnaissance.

Despite its importance to the war effort and being conspicuous from the air by being painted white, the Medmenham site was never attacked by the enemy.

It remained an RAF station into the Seventies, when it became the headquarters for the Carnation food company. Subsequently, the main building was converted into the Danesfield Hotel.

The next meeting of the society will be on Tuesday, February 11, when Catherine Sampson will give an insight into “Georgian cooking”. The society’s annual meeting will be held on Tuesday, March 10.

Meetings are held in the Old Pavilion at Wargrave recreation ground, starting at 8pm. For more information, call Peter Delaney on 0118 940 3121 or visit www.wargravehistory.org.uk