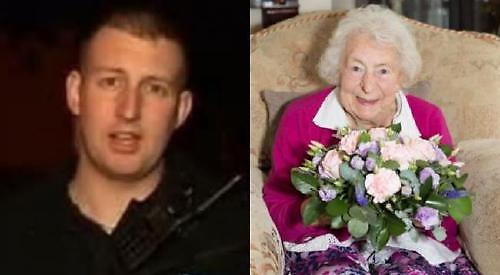 POLICE have been cleared of any wrongdoing after a crash which killed an officer and an elderly woman near Wargrave.

Pc James Dixon and Gladys Goodwin died at the scene of the incident on the A4 Bath Road on December 5, 2017.

Mrs Goodwin, 91, from Wargrave, was the passenger in a car which was turning right into Blakes Lane when it was hit by Pc Dixon’s motorcycle.

The court heard that Pc Dixon was taking part in a surveillance training operation with Her Majesty’s Revenue and Customs and may have been travelling as fast as 97mph in the 50mph zone.

The Independent Office for Police Conduct, which carried out an investigation, said it “found no justification any police officer behaved in a manner that would justify the bringing of disciplinary proceedings or had committed a criminal offence”. The watchdog said it had identified an “apparent confusion” around police exemptions regarding speed being applied by officers.

It concluded that future training exercises might benefit from a more shared approach to risk assessments being taken between HMRC and the assisting police force.

Sarah Green, IOPC regional director, said: “I extend my condolences to the families and everyone affected by the death of Gladys Goodwin and Pc James Dixon.

“At the end of our investigation, we provided our findings to Thames Valley Police and HMRC and offered to arrange a debrief to discuss organisational learning, which needed to be addressed by the agencies involved in this training exercise. This was delayed until the conclusion of the criminal trial. Now all proceedings have concluded we will go ahead with arranging this.

“We found that although the training exercise Pc Dixon was taking part in did adhere to policy and procedures, improvements could be made to ensure all officers are aware of when speed exemptions are applicable or not.”

More than 40 witness statements from police officers, HMRC staff and members of the public were taken during the investigation.

In a statement, Thames Valley Police said: “Evaluation of this incident has been ongoing and any way to improve risk assessments and current policies, despite actions on the day being in line with them, have been established and are welcomed to improve the safety of our officers and staff, our partners and the wider community.”

PC Dixon, 39, known as “Dixie” from his appearances on TV’s Road Wars, was married and his widow Samantha gave birth three months after the incident.

Mrs Goodwin was being driven home from Slough to Wargrave by Miss Jasulaitiene when the crash happened.