Children meet some unusual creatures at the library 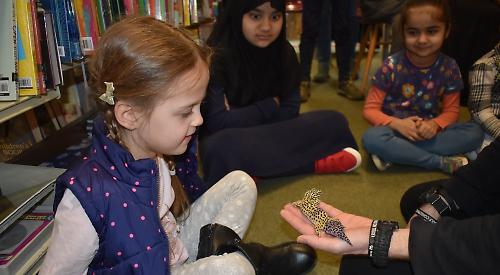 CHILDREN were able to handle snakes, snails and geckos during a half-term animal roadshow at Wargrave library.

He took them out of their boxes one at a time and gave the children the chance to hold them while explaining their habitat, diet and how they survived in the wild.

When he presented the scorpion to the children, he turned off the lights and used an ultraviolet light to show how its body glows in the dark.

He also showed them a crested gecko, which was shedding its skin.

Mr Quirk said: “I started this business to educate people about animals. We go to schools and nurseries to do educational talks and we also do birthday parties.

“We try to keep it fun but informative and we also want to help the children conquer their fears. I had one boy who was petrified of a rabbit. Wildlife is very important and we want people to realise how magnificent these animals are.”

Mrs Fernley said: “We have had Luke here before and he is always fantastic. The February half-term always does very well, whereas some of the other weeks later in the year are quiet because people are on holiday or visiting family.”